Panthers fall at home to Calera 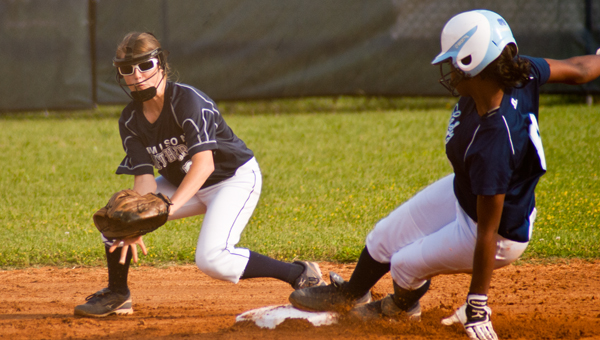 Not in time: Jemison second baseman Wendy Spigener, left, receives a throw but not in time to tag out Calera’s Jocelyn Davis, who slides in safely.

A 13-0 loss to Calera on Thursday dropped Jemison’s softball team to below .500 on the season.

Jemison’s offense posed its first real scoring threat in the bottom of the third inning.

Wendy Spigener singled with one out, and Shelby Griffin followed with a walk.

Morgan Lucas laid down a sacrifice bunt to move the runners into scoring position with two outs, but JHS couldn’t muster a clutch hit.

Tiffany Guin doubled to lead off the bottom of the fourth, but the Panthers couldn’t find a way to get her to the plate for a run.

Guin was the losing pitcher.