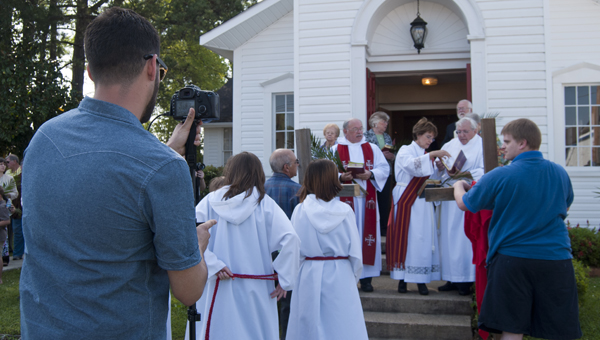 A film crew from New York City was in Clanton this past weekend filming Trinity Episcopal Church's services. The Clanton congregation will be featured in the national church's "Transforming Churches, Changing the World" video project. Shown above is a cameraman filming the annual exchanging of the Lenten crosses prior to Trinity's and Resurrection Roman Catholic Church's Palm Sunday services.

When Bill King came to Trinity Episcopal Church nine years ago this week, there were only eight people in the pews.

Fast forward to 2012, when the sanctuary was nearly filled for Palm Sunday services.

That growth and renewed vitality has not gone unnoticed — Trinity will be one of just a handful of congregations across the country featured in the Episcopal Church USA’s “Transforming Churches, Changing the World” project. 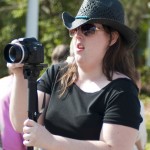 The short, 5-minute film will be featured online this fall on the national church's website and VIMEO channel, vimeo.com/episcopalchurch.

The documentary project, which is in its second year, highlights churches that are growing and making a difference in their community.

Last year, the short films focused on larger congregations in Boston, Chicago, Philadelphia and other cities. However, this year the spotlight will be on smaller churches, much like Trinity.

“(We are) doing profiles of churches that are growing and giving insight into how they are growing,” said Olivia Silver, editor and producer.

Silver said the churches, which includes parishes in California, Nevada, Missouri and North Carolina, all have one thing in common — community.

“These churches are becoming integrated in the community,” Silver said. “They are getting out there and interacting.”

A film crew in town this past weekend recorded Trinity’s worship service as well as members working Saturday in the church’s rice and beans ministry, which helps to feed as many as 100 families in the winter months.

It’s that ministry as well as other outreaches that may help explain why the church has grown in recent years, King said.

“I’ve done many things with the church over the years — (the rice and beans ministry) is the most rewarding thing I have done,” King said. “Believe me, it’s the most miraculous thing I have ever done, that this parish does.”

The fact that the church still exists today is somewhat of a miracle itself.

The sanctuary that houses Trinity will be 100 years old next year, making it one of the oldest buildings in downtown Clanton, but many of those years the building sat vacant. 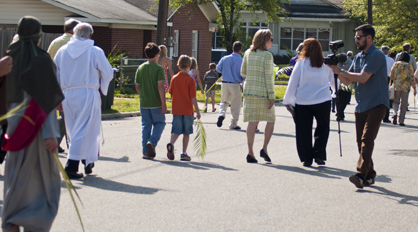 When Trinity's rector Bill King first came to Trinity nine years ago this week, only eight people were in attendance. Today, the church has about 80 members. Shown above are Trinity and Resurrection members during their annual Palm Sunday procession.

The Seventh Day Adventist Church bought the property and built the church building around 1913. The Episcopal Diocese of Alabama bought the building in 1954 and had an active congregation through the 1950s and 60s.

However, attendance waned and eventually disbanded altogether. From 1970 through 1995, no church held services in Trinity.

The Episcopal Church was reestablished in 1995 though numbers were still low but they grew steadily. In 2009, the Alabama Diocese approved Trinity as a permanent parish.

The little church that could, once without a congregation, now enjoys one 80 strong.

Trinity’s “Transforming Churches” film will be about five minutes long and featured on the national church’s website and VIMEO channel. Look for it this fall at vimeo.com/episcopalchurch.