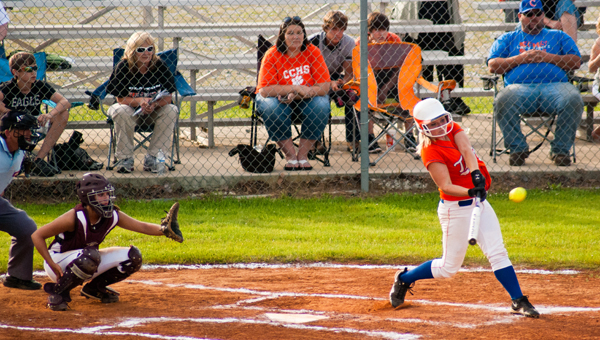 Swinging for the fence: Chilton County’s Holly Watts hits a home run Tuesday with two runners on base to end the game in the fourth inning.

It was Chilton’s sixth straight win.

Coker didn’t allow a hit until the fourth inning, which would turn out to be the final inning. Thorsby’s Braiden Gottier recorded her team’s first base knock of the game and was followed by an infield hit off the bat of Josie Adams.

Coker struck out the next two batters to preserve her shutout. She recorded 10 K’s for the game.

Coker singled with one out in the bottom of the fourth, and Mary Kat Graham doubled. Then, Holly Watts drilled the first pitch she saw over the fence in left-center field to end the game via mercy rule.

Watts had hits in each of her four at-bats. She also had a double, to go along with five runs batted in and three runs scored.

Graham went 2-for-2 at the plate with two walks and three runs scored.

Both Lindsey Parrish and Brianna Cleckler went 2-for-2. Parrish had two RBI and scored two runs, and Cleckler drove in three runs.