A Jemison Elementary student was killed in a car accident Saturday afternoon near Kentuck Park after the Tuscaloosa Regional Air Show. 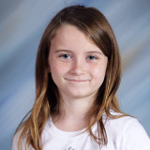 Second-grader Haylee Burks, her 28-year-old mother and 3-year-old sister were walking to their car on 5th Street after the event when a black 2008 GMC Sierra pickup struck Burks and her mother and sister, according to authorities.

The driver of the vehicle, Danny Ray Smith, 64, was arrested by Northport P.D. and charged with vehicular homicide, leaving the scene of an accident and two counts of first-degree assault, said Capt. Loyd Baker with the Tuscaloosa County Sheriff’s Office homicide unit. Smith was originally charged with DUI, which lead to the vehicular homicide charges.

A fourth man walking behind Burks and her family was also struck by Smith’s vehicle but was not hospitalized for injuries.

Burks and her mother and sister were transported to DCH Regional Medical Center.

Burks died at DCH and her mother and sister remain hospitalized Monday afternoon.

“She was a sweet child and a good student, and will be greatly missed among the student body,” JES Principal Louise Pitts said of Burks.

Pitts said counselors and pastors from area churches will be on the JES campus to talk to students and faculty as the need arises.

Ken Daniel, husband of Burks’ teacher Susan Daniel and pastor at Friendship Baptist Church in Clanton, has spent time at the school Monday as well.

“He had frequently come and had lunch with the class,” Pitts said. “We felt that his presence on campus would be a comfort to the students and faculty members.”

Pitts said students in Burks’ class wrote a note to her family and a note to Burks on Monday morning.

“They wrote a note to Haylee and attached that to some helium balloons and went outside and released the balloons,” Pitts said.

Burke’s sister was expected to be released some time Monday from Children’s Hospital in Birmingham. Her mother remains in DCH’s intensive care unit in stable condition.

Smith, who owns Dixie Air and Danny Smith Realty and Construction in Tuscaloosa, was released from the Tuscaloosa County Jail on Sunday on bonds totaling $110,000.

Funeral arrangements for Burks had not been determined Monday afternoon but will be announced later by Ellison-Cleckler Funeral Home of Clanton.

Check back for updates on this story.