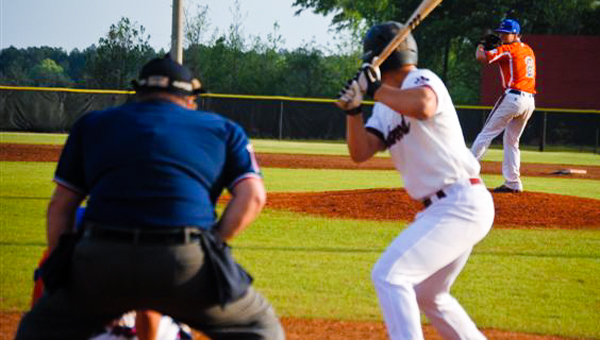 Chilton County's Trevor Thomas delivers a pitch during a win over Brookwood on March 29.

The Chilton County baseball team is on quite a roll.

It’s no accident that the Tigers have won 18 of their last 20 games, slipped into the state Class 5A rankings and recently picked up three consecutive wins over what could be their toughest area competition.

Coach Josey Shannon knew the team had a chance at success when a core group of players matured, so when that group was young, he played them against some of the state’s best competition.

The Tigers took their lumps, but now they’re reaping the benefits of gained experience.

“They bought into what we were selling a long time ago,” Shannon said. “The kids have always been the same–nothing has changed. They’re just finally seeing the reward for all their hard work.”

CCHS is 18-4 on the season. Their worst loss of the year, 9-3 to Prattville, was one of two setbacks on Opening Day, Feb. 20. They’ve lost only two games since.

Chilton entered the Alabama Sports Writers Association’s 5A poll this week, at No. 10.

“That’s something they’ve been wanting: to get some state recognition,” Shannon said.

A few of the team’s most significant wins came this week against area opponent Brookwood.

The Tigers blanked Brookwood, 3-0, at Clanton’s Jack Hayes Field on March 27. Then, two days later, Chilton won at Brookwood, 15-4, even after giving up four unearned runs in the first inning.

CCHS still has to play three-game series against Paul Bryant and Central-Tuscaloosa, but the wins over Brookwood could result in the Tigers having home field advantage in the first round of the state playoffs.

The second game of a doubleheader against Brookwood on March 29 would have no impact on the area race–because Chilton had already won two games in the series–but still the Tigers refused to lose, fighting back from a 7-3 deficit in the sixth inning to win, 13-10.

Thomas hit an inside-the-park grand slam, Trenton Bishop drove in the go-ahead run with two outs in the sixth, and Cummings closed the door the last two innings for the save.

Headley, Bishop and Blake Teel all had two hits in the game. Forrest Knight started and pitched two innings, and Kipp Moore relieved Knight before Cummings came in.

“We’ve had a lot of perseverance,” Shannon said. “The kids just seem to be playing with a lot of confidence.”