Chris David is Verbena’s new baseball coach–a position he imagined himself in but certainly under different circumstances.

David took over on an interim basis for the Red Devils’ game against Billingsley on Feb. 23, their second game of the season. 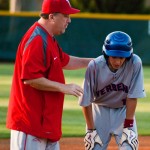 Former coach Chris Stano was forced to miss time for personal reasons, and David was the logical choice as the team’s assistant. With Stano’s absence ongoing, the Chilton County Board of Education made David the head coach at a meeting on March 20, and he will at least finish the season as coach.

David came to Verbena from Heritage Academy in Columbus, Miss., with an idea that one day he might have the opportunity to coach the school’s baseball team, but he didn’t expect to take over after one game.

“I basically tried to start back from scratch,” he said. “Because these boys had played under coach Stano last season, they were comfortable with him, and the parents were as well. It has taken some getting used to. Not that coach Stano was doing anything wrong, it’s just that each person wants to kind of make his mark.”

David has been especially bothered by his team’s fielding, which often manifested itself in a single inning that costed VHS a win.

The Devils have a 3-12 record that could be 11-4 if you could take each of the losses, throw out a single inning and pretend it never happened.

“I want a team that is defensive-minded, that can rely on the pitcher making the batter hit and fielding the ball,” David said.

The fielding is improving, he said, and the pitching could be a team strength.

But injuries, illnesses and suspensions have so far kept the team from living up to its potential. Four regular players have missed games.

Still, VHS assured itself a playoff berth with a win last week over area foe Autaugaville, and the Devils have a chance next week to win their area–and thus earn home field advantage in the first playoff round.

Verbena hosts area foe Maplesville at 3:30 p.m. on April 3, and VHS travels to Maplesville on April 5 for a doubleheader beginning at 1 p.m. Whichever team wins at least two of those games will be the area champion.

In order to compete in those games, David said his team will have to mature.

David is familiar with turnarounds, from his time at Heritage Academy and at Pickens Academy in Carrollton. He said he thinks the Devils have the talent to win now, but he’s also building for the future.

“[Stano] has told everybody that’s involved that he plans to be back next year,” David said. “I told everyone that this is his child. When he gets back, I would not feel comfortable taking someone else’s job based on those circumstances. But I’m coaching it as if next year I’ll be the coach.”