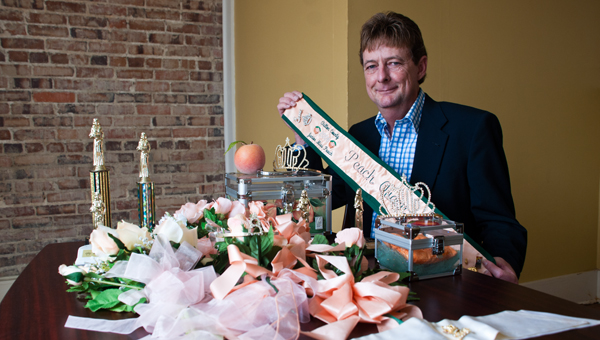 New man in charge: Wayne Caton got started with the Chilton County Peach Pageant when his daughter, Ashley, participated 18 years ago.

Chilton County’s annual Peach Pageant has been a part of Wayne Caton’s life ever since his daughter Ashley competed in the Little Miss Peach division 18 years ago.

When Tom Brown stepped down from his two-year stint as Peach Festival chairman, Caton didn’t hesitate before stepping up to fill the position this year.

“Whenever my opportunity came for me to be chairman, I jumped at it because I thought I had a lot of knowledge to offer,” Caton said. “I have been associated with the pageant for about 18 years prior to Tom stepping down.”

As a single parent, Caton entered Ashley into the pageant not long after her mother, Gene, had passed away.

“I entered her in Little Miss, and every year all the way up, she wanted to be in it,” Caton said. “She was hooked. It was an event that she looked forward to every year.”

Caton said his new role is filling a void he had after Ashley became too old to compete.

Fittingly, Ashley will spend her first year as a non-contestant helping her father behind the scenes.

“She’s excited about it,” Caton said. “The pageant has come a long way since that first year we entered.”

This year, for instance, everyone who registers for the pageant will receive a booklet detailing the parties and events for the girls throughout the two weeks of the festival.

In addition, the girls will receive customary pageant gifts at each party instead of registration.

“The parties are to help them to have fun, get to know their Peach sisters and enjoy the pageant,” Caton said. “It highlights the importance of our peach industry, our peach farmers. We want to educate the girls on our peach crops so they’re very knowledgeable about our farming industry here in the county. This is something we have not done in the past.”

The list of sponsors and prizes is longer this year, Caton said. The pageant will be held at Chilton County High School.

A Miss Photogenic category has returned and will be judged by an outside company, Caton said.

Another new feature available to registrants will be a personal photographer who will take individual formal and candid shots during all pageant activities.

“The girls can sign up for the photographer to follow them throughout the pageant,” Caton said. “All those pictures will be available on a CD at the end of the pageant. For moms not to be worried about chasing behind their daughter to get the right photograph … I think it’s an added benefit.”

“Winners will be able to ride in their own car in the parade,” Caton said, adding that a dress boutique in Birmingham will provide winners with dresses to wear for subsequent events.

“There is an army of volunteers that are behind the scenes to put this pageant on,” Caton said. “They are so greatly appreciated. It could not be done without all their help.”

Peach Pageant registration will be May 6 at 1:30 p.m. at Clanton First United Methodist Church.

All funds raised during the Peach Festival go directly back to Chilton County and are divided among different charities.

“It highlights the importance of our peach industry, our peach farmers,” Caton said of the pageant. “It also educates our young ladies on the importance of agriculture in the county, and then it gives them the chance to meet a lot of very important people throughout the year.”