The CCHS baseball and softball squads proved to be the best in the county in convincing fashion. 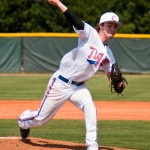 Trevor Thomas was the winning pitcher in the championship game of the Chilton County Baseball Tournament.

The two teams each won four games in their respective county tournaments, and both won those games by a combined score of 42-3.

“Everybody played well,” CCHS softball coach Krisi Parrish said. “We batted .407 as a team, made two errors the whole tournament–I’m very proud of all of them.”

Baseball coach Josey Shannon could have said the same thing. Like the softball team, his set of Tigers was never challenged during the course of the tournament.

The closest win was a 6-1 decision over Thorsby on March 16. On March 17, Chilton earned a 12-2 win over rival Jemison in the county championship game.

JHS trailed CCHS 3-2 after 3 1/2 innings, but the Tigers scored six runs in the bottom of the fourth and an exhausted Jemison team that had already spent most of its pitching during a 10-inning win over Thorsby earlier in the day couldn’t catch up.

Trevor Thomas was the winning pitcher. He allowed two runs (neither one of which was earned) in four innings while striking out two. 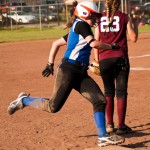 The CCHS pitching was strong all week. Forrest Knight started the week off with a one-hitter in a win over Isabella.

Shannon said he was proud of the way his team focuses and performed, considering the situation: a lively environment and five teams that wanted nothing more than a chance to knock off the county’s largest school, which just happened to be the defending champions.

Still, the Tigers started slow in several of their wins.

“We don’t understand the phrase, ‘sense of urgency,’” Shannon said. “Once we get comfortable, we go out there and put some runs on the board.”

The CCHS baseball team has now won 10 consecutive games this season and six county championships in as many appearances. The Tigers didn’t participate in 2009 or 2010 tournaments.

Saturday’s title was the softball team’s fourth in six years. The Tigers defeated tournament host Maplesville, 7-2, in the championship game.

Brianna Cleckler and Kadie Coker combined to hold the Red Devils scoreless except for the sixth inning, when CCHS had built a 7-0 lead.

Cleckler was named the tournament’s Most Valuable Player. She struck out 16 of the 24 batters she faced in a game earlier Saturday against Jemison.