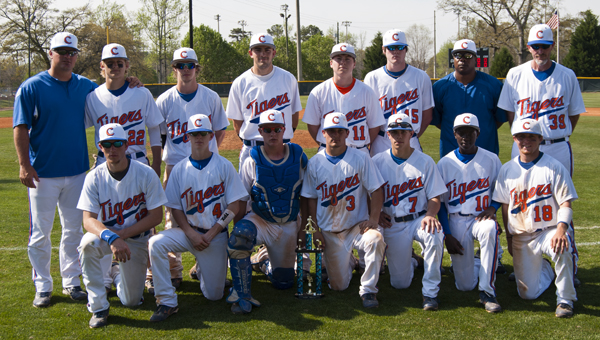 Chilton County High School won the annual county baseball tournament Saturday with a 12-2 victory over Jemison in the championship game.

The Tigers didn’t drop a single contest in the double-elimination event, while Jemison had to fight its way through the loser’s bracket after a setback to Thorsby early in the tournament.

The Panthers avenged that loss with a 6-5, 10-inning win over the Rebels in the first game Saturday. Jacob Hatch blooped a one-out single over first base that landed just fair and kicked off the playing field, allowing Jacob Hatch to score from second base.

JHS trailed CCHS 3-2 after 3 1/2 innings, but the Tigers scored six runs in the bottom of the fourth and an exhausted Jemison team that had already spent most of its pitching couldn’t catch up.

It was a dominating performance by Chilton, which won four games by a combined score of 42-3.

Trevor Thomas was the winning pitcher Saturday. He allowed two runs–neither one of which was earned–in four innings while striking out two.

Check clantonadvertiser.com later, and see Tuesday’s newspaper, for more on the tournament.