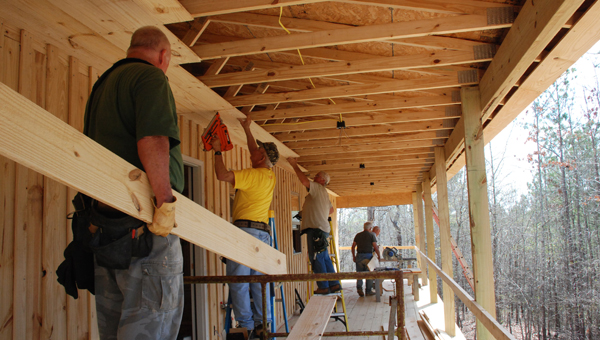 Alabama Campers on Mission volunteers work on the back deck of one of the cabins at Raleigh's Place.

A full house is not a foreign concept to Sharon and Tim King, founders of the children’s home Raleigh’s Place near Lake Mitchell.

Their house has been even fuller lately with volunteers coming in and out, helping complete cabins for their summer camp that is scheduled to begin in June.

The camp will consist of two sessions, one for elementary-aged children (first-eighth grades) and one for high schoolers (ninth-12th grades).

“We’re looking to have one the third week of June and the second week of July,” Sharon said. “Just a blessing from God. Everything we’ve done, He’s provided for it along the way.”

King said a volunteer group called Alabama Campers on Mission began arriving Feb. 23 and will work until March 20 building the last two cabins for the camp.

“These are mostly retired men and women who travel and pay their own way as they serve the Lord with their hands and hearts,” Sharon said. “They started two cabins, and they will both be ready for sheetrock when they leave.” 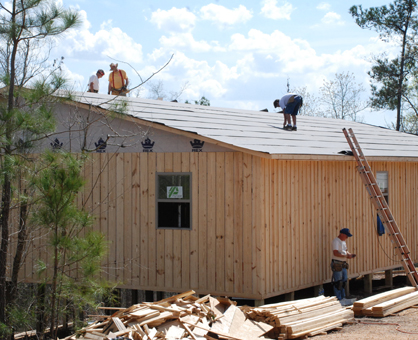 Volunteers braved 80-degree temperatures in mid-March as they worked on the roof of a new cabin.

Many individuals and churches have contributed to the project, Sharon said.

“We’re going to be working most every Saturday from now till the end of May, but I’m certain we’ll be ready because that’s what God wants us to do,” Sharon said. “We really feel like we need to go ahead and have camp this summer.”

Campers will have access to the picnic pavilions for mealtimes since the camp’s dining facility will not be completed for this summer.

“With the economy the way that it is, it’s amazing that we have four cabins built in a year and a half,” Sharon said, noting that the two newest cabins will be available by June 1 for groups to reserve for men’s and women’s retreats, family reunions and more events.

“This helps generate money for foster kids for camp in the summer,” Sharon said.

To volunteer with construction or the camp, call Sharon King at (205) 755-9615, email raleighsplace@gmail.com or visit raleighsplace.org.