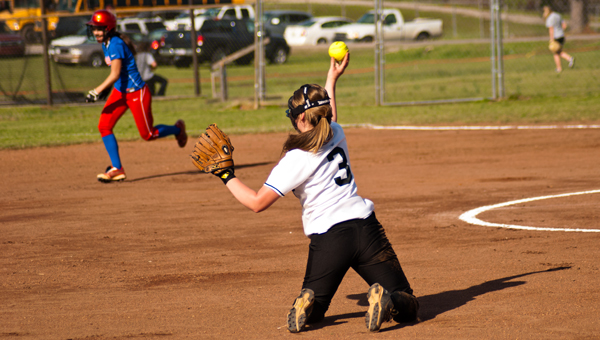 Making the play: Isabella shortstop Caley Booth (3) throws from her knees to try to get Verbena’s Lacey Short out at second base during Thursday’s county tournament game.

Isabella, Thorsby and Chilton County were winners on the first day of the county softball tournament.

The Mustangs jumped on top early, plating seven runs in the top of the first inning. They were helped by six bases on balls.

The biggest blow was a two-out, two-run base hit by Melony Smith that scored Brianna Tyler and Taylor Chandler.

IHS scored six more runs in the third inning, two of those runs on a double by Ann Marie Murray.

Verbena fought back in the bottom of the third with three runs of its own, helped along by three Isabella errors. But the Mustangs buckled down, got the third out and ended the game early.

IHS coach Mike Ratliff said he was happy with how his team began its tournament showing.

“That’s the foot we needed to start off on,” he said.

Ratliff said the Mustangs have played more consistent defense of late–something that plagued the squad earlier in the season and cropped up again in the third inning of Thursday’s game.

The coach put at least part of the blame on the situation: having a big lead and playing in warmer weather than the players are used to.

“It’s awfully easy to get relaxed,” he said.

Thorsby won the second game of the day, 6-1, over Jemison; and CCHS defeated Verbena, 15-0.

Lindsey Parrish allowed only three hits and no walks as the starting pitcher in the nightcap, and she went 2-for-2 at the plate with a triple and four runs batted in.

The tournament is being hosted by Maplesville.