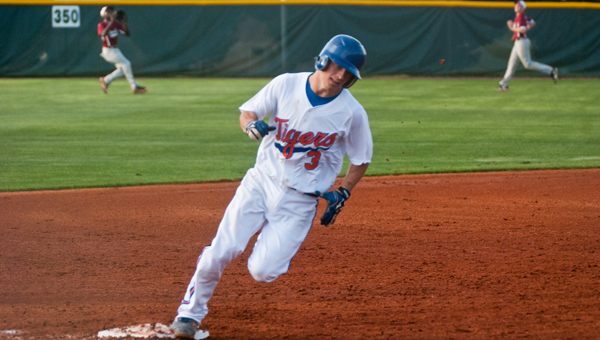 Chilton County's Kipp Moore rounds third base while a ball was hit to the Maplesville outfield Tuesday.

The Tigers on Tuesday won their second tournament game in as many days. They’ve outscored Isabella and Maplesville 24-0, winning each game 12-0.

But Maplesville controlled the game early, outhitting CCHS 3-0 through three innings. The Red Devils had baserunners in each of those innings but couldn’t push a run across.

Then, Cameron Cummings led off the fourth inning with a hit. One out later, Craig Headley, Trevor Thomas and Blake Teel recorded consecutive hits.

The Tigers led 3-0 before four of the next five batters were issued bases on balls, plating two more runs. Perhaps Maplesville’s hopes were crushed with Kipp Moore’s two-out, two-run single that made it 7-0.

Chilton ended the game early with another big inning in the sixth, scoring five runs. Oddly, there wasn’t a single run-scoring hit in the frame.

J.D. Minor scored on a walk, Moore and Headley scored on an error and Trevor Thomas and Trenton Bishop scored on two different wild pitches.

Tyler Maddox earned the win for the Tigers, holding Maplesville scoreless through four innings. He gave up four hits and one walk while striking out one.

Evan Moatts came on in relief and struck out four batters in two innings pitched while only allowing one hit.

CCHS will play the winner of Tuesday’s Thorsby-Verbena game at 4:30 p.m. Friday. That game ended too late to be included in this edition of The Clanton Advertiser.

On Thursday, Jemison and Maplesville will play at 4:30 p.m., and Isabella will play the Thorsby-Verbena loser at 7 p.m. Both of those games will be elimination games.

The tournament is being hosted by Verbena at Clanton’s Jack Hayes Field.