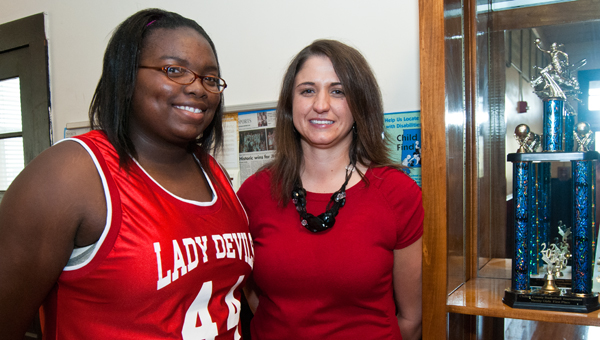 Nicole Ivey knew nothing about the Verbena girls basketball team until the new coach held an open tryout session.

Ivey became acquainted with Marqueska Deramus in a hurry.

It was obvious to Ivey how much Deramus’ teammates depended on and looked up to her—and how talented the senior center was.

“You started putting it together real quick,” Ivey said. “Get Marqueska the ball—that was the game plan.”

Deramus transferred to Verbena as a shy freshman. She will leave having scored 1,382 points in her career and 401 as a senior while leading the Red Devils to their first ever Chilton County Tournament championship.

She has scored as many as 31 points in a game but says her best game was because of an outstanding defensive effort.

“I like blocking shots more than anything,” she said.

Opposing teams this season knew their best chance to win was if Deramus was on the bench, so they would try to bait her into fouls, even using abusive language in an effort to get Deramus to retaliate.

She took the abuse, but Ivey said Deramus had a more difficult time when her teammates took a pounding.

It was those teammates—especially a group of juniors including Lakeyn Edwards, Lacey Short, Hope Driver, Jameshia Green and Taylor Kohn—that helped Deramus and the program reach new heights.

“I think they’ve broken out of their shell,” Deramus said.

Their progression—similar to Deramus’—gives Ivey hope that the program can continue to be successful even without a player of Deramus’ caliber.