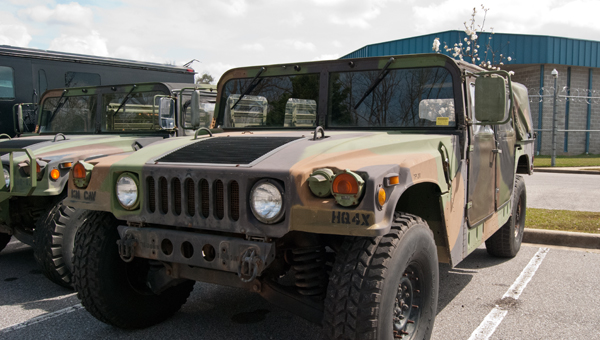 When a tornado struck the Verbena area on March 2, Chilton County Sheriff’s Deputies had a secret weapon when responding to the scene of the disaster.

And the equipment didn’t cost the county a dime.

Sheriff Kevin Davis said his department has been the recipient of more than $200,000 worth of U.S. military surplus equipment over the past couple of months.

“Any branch of the armed forces, once they deem a piece of equipment surplus, they put it on a website and assign it to the 1033 Program,” Davis said. “If you’re a member of the program, law enforcement can request it. It’s no longer any good to the government and law enforcement can use it, so it’s like, ‘Why not use it for another function?'”

Agencies apply for things they think they can use, and if the equipment is granted to an agency, it comes at no cost and with no strings attached other than the agency must keep the items for a certain amount of time.

Four new humvees obtained by the sheriff’s department, for example, must be kept for one year before they can be sold or transferred to another agency.

Those humvees were helpful when responding to the tornado because roadways were littered with debris or blocked altogether.

“Our patrol cars are not made to do that kind of work,” Davis said. “It’s just a great tool to have. In my opinion, we were able to get to some people faster than we normally would have.

“We can offer services with this equipment that we couldn’t normally offer, just based on the county’s revenue.”

One expense that could arise is maintenance of the vehicles, but Davis said each arrived with fewer than 40,000 miles and that they would be used so infrequently that maintenance shouldn’t be a concern.

Davis said he received training on how to search and apply for items through the 1033 Program. His department has also recently received scopes for rifles that were already in each patrol car, boots, coveralls, sleeping bags, medical equipment and several different kinds of bags and backpacks.

The items aren’t ones that deputies are expected to use on a regular basis, but Davis said they are things that could come in handy.

“This is stuff that is great to have,” he said. “Like 12 sets of coveralls. We wouldn’t normally buy that, but if somebody is going to give it to us, we can take those and put them in the trunk of each patrol car in case the need arises.”