Rebels fall to Trinity at Riverwalk 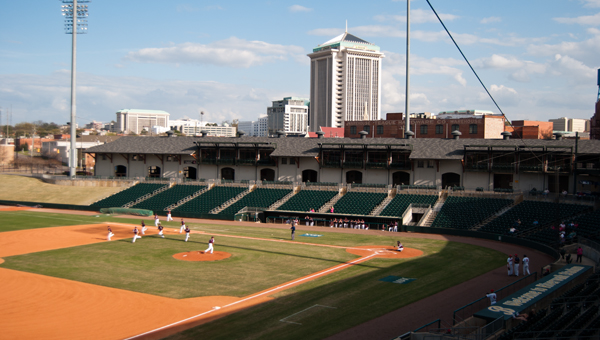 The Thorsby baseball team takes the field in the third inning of a game Thursday against Trinity Presbyterian played at Riverwalk Stadium, the downtown Montgomery home of the Double-A Biscuits ballclub.

Thorsby’s baseball team lost on Thursday, but it was an experience that might benefit the Rebels down the road.

Trinity Presbyterian is a fine team to be sure, but the 8-3 setback also came on one of the state’s biggest stages: Riverwalk Stadium, home of the Double-A Montgomery Biscuits.

Thorsby and Jemison are competing this week in the Jason Armstrong Memorial Tournament sponsored by the Fellowship of Christian Athletes. Jemison’s game Thursday against St. James ended too late to be included in the Thursday edition of The Clanton Advertiser. 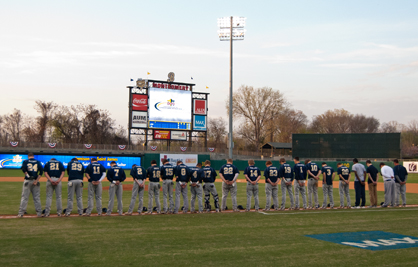 Big stage: The Jemison baseball team lines up for a prayer and the National Anthem before a game Thursday against St. James.

The strange situation may have contributed to Thorsby’s bats falling silent in the first six innings of Thursday’s game. The Rebels mustered only two hits off Trinity starter Tatum Dean until the seventh and final inning.

By that time, Trinity had an 8-0 lead, thanks in large part to No. 9 hitter Allen Wood going 3-for-3 at the plate with a double, three runs scored and one run batted in.

Thorsby starting pitcher Jason Price kept his team in the game until the bottom of the fifth inning, when three consecutive hits grew the lead to 7-0.

Jace Maddox, Bo Hoffman and Denham Childress recorded three consecutive hits for Thorsby in the seventh inning—including a run-scoring triple to the outfield wall by Hoffman—but it wasn’t enough to get the Rebels back into the game.