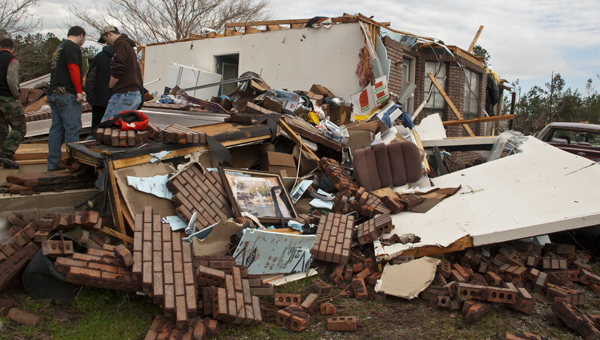 Family and friends help Daniel and Donna Velasquez salvage items from their home off County Road 524. Donna is a teacher at Clanton Intermediate School, and her son, Ian, is a senior at Chilton County High School.

The roar of chainsaws — an all-too-common soundtrack to spring in Alabama — could be heard Saturday morning as people started to clean up from a tornado near Verbena.

No injuries were reported in the storm that skirted the southeastern edge of the county, according to Chilton County EMA Director Bill Collum. 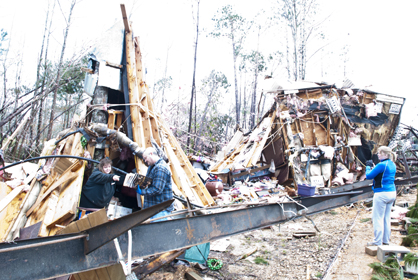 Kelly Sullivan's friends and family help her save what they can from her mobile home off County Road 526. No one was at home when the tornado hit. The family's blind Chihuahua was found safe and sound this morning under debris.

Friday’s storm marks the second time in less than six weeks that Chilton County has been hit with a nighttime twister without any serious injuries. Maplesville and the Enterprise community were hit by separate tornadoes back on Jan. 23.

Daniel and Donna Velasquez’ home near the intersection of U.S. 31 and County Road 524 was destroyed. The couple, along with their 17-year-old son, Ian, rode out the twister in their master bedroom’s walk-in closet.

Donna said her son noticed someone had posted something on Facebook about the tornado warning.

As Donna and Ian quickly took refuge in the closet, Daniel continued to watch storm reports on the bedroom TV.

“Next thing we knew, he said the storm was crossing the Interstate at Verbena,” Donna said.

Donna said she remembers her husband diving on the floor over them as she was screaming and crying.

“It wasn’t so much of a train, as this massive noise and then the roof coming off the house,” she said. “I really thought we were going to die. … It was this pounding and vibrating.” 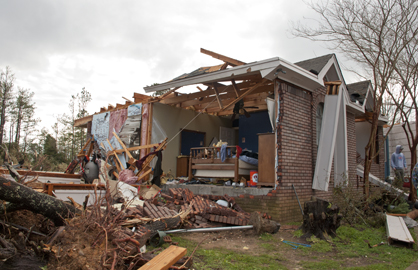 Donna Velasquez said she heard a massive noise and then the roof being ripped off her home.

And as quickly as the storm came, it went, replaced with a heavy rain. The family was able to take refuge in a neighbor’s car.

One road over on County Road 526, Kelly Sullivan’s mobile home was torn apart by the storm.

Sullivan was at work at Hatley Healthcare, while two of her sons, ages 10 and 11, took shelter in the basement of her mother’s nearby house.

Sullivan’s family and friends spent Saturday morning looking for sentimental items, including toys for the kids. One of her boys asked for his Transformers, which they were able to find.

“When you lose everything, just to have something you love helps you get through it,” she said.

The family’s blind Chihuahua was found safe Saturday, buried under rubble. Their five chickens also escaped despite their coop being tossed up in the air. 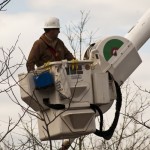 “I don’t know how my dog made it,” Sullivan said. “I’m just thankful that my kids are OK and my critters.”

Sullivan’s mother’s home also sustained damage and her sister’s mobile home down the road had two trees fall on it.

“I don’t know even if I want to live in a trailer again … I may live underground!” she said surveying what’s left of her home.

At least 14 homes were damaged in the storm and five of those were totally destroyed, according to Collum.

Collum said he was able to follow the damage path for about 5.5 miles and estimated it to be about 300 to 400 yards across at its widest. 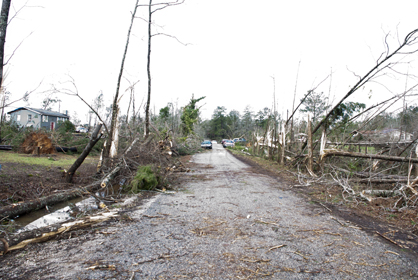 County Road 526 after being cleared of downed trees.

About five families will not be able to stay in their homes tonight. They plan to stay with other family members and friends, he said.

The Salvation Army was on the scene Saturday morning. Red Cross teams were expected to respond too, Collum said.

Donna Velasquez cautioned others to take the threat of severe weather seriously in the future.

“Don’t get complacent,” she said. “You take cover; you get there. Do what you need to do to be safe.”