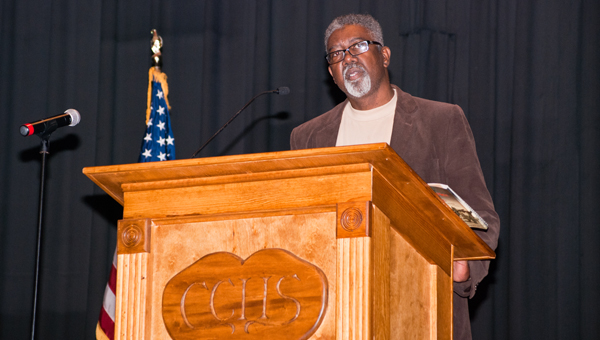 Joseph D. Caver, an expert Air Force and Alabama history who spoke at Chilton County High School's Black History Month program on Wednesday, was consulted for a documentary about the Tuskegee Airmen.

Joseph D. Caver, an archivist at the Air Force Historical Research Agency at Maxwell Air Force Base, is an authority on Air Force and Alabama history. 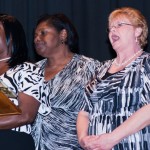 The Cuisine Choir—a group composed of CCHS cafeteria workers—sang "I'll Fly Away" at the program.

He talked to a crowded CCHS auditorium about the Tuskegee Airmen–how they tore down racial stereotypes of the time and how they once trained out of a hangar at the Chilton County Airport.

Before the Airmen were renowned for their heroics in World War II, a commonly held opinion was that black people “lacked the mental capacity, aptitude and reflexes” to pilot aircraft in battle, and that they were a “mentally inferior subspecies of the human race,” Caver said.

“Nothing could be further from the truth,” he said. “In fact, this myth was disproved by the Tuskegee Airmen.”

Caver said he began his professional career in Clanton, teaching for about one year at the skills center in West End in the 1970s.

He was consulted during the production of “Double Victory,” a documentary about the Tuskegee Airmen by Lucasfilm, who also produced the popular film “Red Tails” about the group based in Alabama.

The term “Double Victory” comes from a newspaper account at the time that said the Tuskegee Airmen were fighting against both fascism in Europe and discrimination at home.

Before the video, Clarke Watley talked about “Pride in America;” Delondre DeJarnett read a biography of Carter G. Woodson, an African-American historian, author and journalist who has been cited as the “father of black history;” and the school’s lunchroom staff, dubbed “The Cuisine Choir,” singing “I’ll Fly Away.”

“Every one of you have the ability and the wherewithal to do whatever you want,” CCHS Principal Greg DeJarnett told the students. “This is the place where it all gets started.”

DeJarnett closed the program by recognizing four black women who have contributed much to the community: Doris Ware, Gladys Stone, Willie Mae Looney and Peggy Mixon.