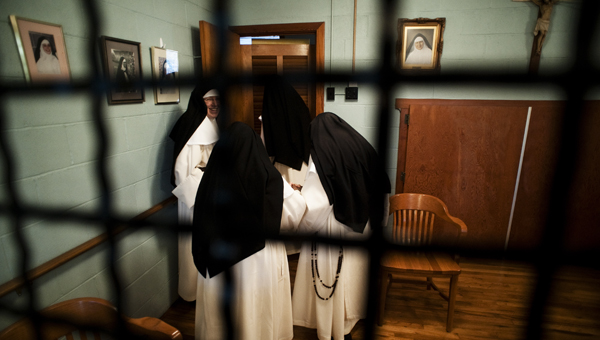 The contemplative nuns at the Dominican Monastery of St. Jude in Marbury have given their lives completely to worship. They are allowed visitors in the parlor (above), but even then are separated from those outside the cloister.

Step inside the Dominican Monastery of St. Jude and you feel like you’ve stepped out of Marbury and into a different world.

Instead of locals living on their farms and attending Baptist churches, inside the monastery on County Road 20 are women from all over the country practicing the Catholic faith. 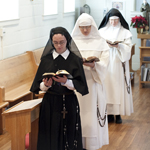 The public is also allowed to see the nuns in the chapel.

The nuns are cloistered, meaning they come apart from the world in order to give themselves completely to Jesus. They spend all their time inside the monastery. Visitors are allowed in a parlor area, and even to enter the chapel to worship in the same room as the sisters, but even then the nuns are separated from those outside the cloister by a divider. Sisters and visitors can see each other, but there is no physical interaction and there is always the understanding that the nuns are inside the cloister while others are outside.

An important part of the monastery’s function is spending time in prayer for the world. The sisters rotate turns so that at least one can always be found praying the rosary in the chapel.

At most times throughout the day, the sisters keep monastic silence, but the monastery echoes at regular intervals with the sounds of the sisters singing in harmony, in Latin.

There is plenty of cooking, cleaning and sewing to be done, but time is made twice a day for recreation, when the sisters bring their own personalities to the community. 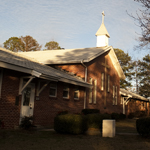 The outside of the monastery.

A sense of humor, in fact, is one of the requirements given for anyone considering joining the monastery, and it is so important because daily life inside the monastery is structured.

The sisters rise at 5 a.m., have morning prayer before breakfast at 6:45, perform household chores at 7:15 and have midmorning prayer, Holy Mass and a work period and midday prayer before dinner at noon. In the afternoon, there is recreation time, study and rest period, midafternoon prayer, another work period, evening prayer and supper before recreation at 7:30 p.m. Night prayer at 8:30 is the last thing scheduled before the sisters retire.

Though a lot to keep up with, it’s a routine they go through every day, and a series of bells helps keep them on schedule.

The sisters say the community life is a blessing itself. “You can’t think you’re perfect, so you have to keep working on that virtue,” Sister Mary of the Sacred Heart said.

The Dominican Monastery of St. Jude began as a vision had by Mother Mary of Jesus, a Dominican sister in the monastery of Catonsville, Md., in 1936. She saw “a crowd of angry black people with clubs in hand engaged in a violent struggle,” according to a history provided by the monastery in Marbury. “A Dominican brother, whom she recognized as Saint Martin de Porres, passed among them. The crowd quieted. The clubs were replaced with rosaries. Martin pointed to a monastery on a hill. There she saw Dominican sisters of all races praying with arms outstretched…She felt God was indicating his desire that there should be an interracial community where any young woman who wished to live the cloistered, contemplative life would be welcome.” 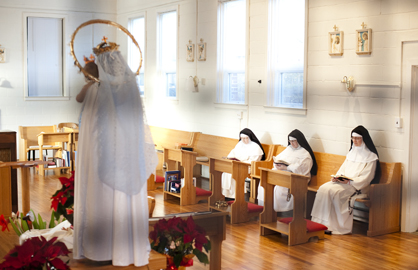 The St. Jude monastery began as a vision by Mother Mary of Jesus, a Dominican sister from Maryland, in 1936. She saw an "interracial community where any young woman who wished to live the cloistered, contemplative life would be welcomed."

There still was the question of where to build such a monastery. A break came in contacting Father Harold Purcell, who had established the city of St. Jude in Montgomery to give black people their own church, school, hospital and social service center. Purcell wanted to have contemplative sisters residing at St. Jude, so that their life of prayer would serve as a source of grace for his many works.

No monastery was available in St. Jude, but there was a house in Marbury, 30 miles to the north, which was available for the purpose.

So, Marbury became home to Dominican sisters, something that no doubt would have come as a surprise to long time residents. “At that time, to see a sister was quite an attraction,” said Mother Mary Joseph, a black woman who is proof that the monastery still holds to the ideal of an interracial community. The sisters come from all over, from as near as Auburn and from as far away as Syracuse, N.Y. They decide they want to enter the monastic life, find out about the monastery in Marbury and then take a visit.

They say they decide Marbury is the place for them because of the small, close-knit community. “I didn’t even look anywhere else—why would I?,” Sister Mary Jordan said of the sense of belonging she had after hearing the sisters sing.

There are several stages to becoming a nun, but after six years from their first entrance into the cloister they take their solemn vows and give their lives to serving God. Then, they never leave the cloister except in cases of medical emergency, and wear a habit every day. “It’s like putting on Christ, to show we belong to Christ,” Sister Mary of the Precious Blood said.

“The purpose of the contemplative life is to give God glory or praise,” Sister Mary Aimee said. “The whole idea is that God deserves our best, so we give our whole lives to him. We’re not here for ourselves. We’re here to give to God and all his people.”

Becky Lucas clings to a picture of her son, Chris Gaines. Chris Gaines was a normal little boy when he... read more