Hall of famer back on CCHS sidelines 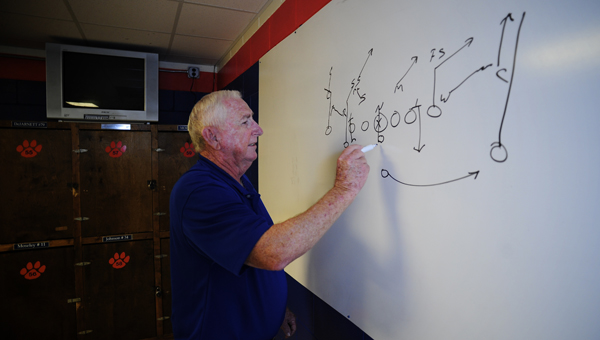 Don Hand retired as CCHS head coach after 18 seasons and 125 wins. He was inducted into the Alabama High School Sports Hall of Fame in 2007.

Don Hand has a story to tell you. You’ll want to hear it. His stories are always good.

Hand and his wife of 44 years, Linda, were going down the road one night. The husband put one hand gently on his wife’s leg and pointed to the starry sky with the other hand.

“That full moon is making me feel kinda funny,” he said in his best romantic voice. Linda turned toward him. “It’s making you look kinda funny, too.”

Don Hand laughs about that. His wife knows him and his sense of humor all too well.

Chilton County also knows Hand well. For his stories, yes, but more so for a legacy that centers around the Chilton County High School football program. The legacy is still growing today.

Here’s another story. When Hand was hired at CCHS in 1970, he had some of the cockiness to be expected from a 27-year-old football coach. 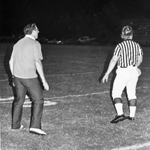 Don Hand's CCHS teams made the playoffs 13 times and never suffered two losing seasons in a row, making good on a promise he made when he arrived in Clanton in 1970.

“If I ever have two losing seasons in a row, I’ll quit. You won’t have to fire me,” he recalls telling a local newspaper in a story that introduced him to the Clanton community. He almost had to make good on that promise.

With opinions still sensitive about integration and the treatment of black students in schools they hadn’t been allowed to attend just a decade earlier, black athletes boycotted the football program in 1979 because there weren’t any black cheerleaders.

The Tigers went 4-6 that season. They went 5-5 the next year. “I didn’t say I’d quit if we didn’t have a winning season. I said if we had two losing years in a row…”

Hand had high expectations, but so did the community, which grew more accustomed to winning the longer Hand roamed the sidelines.

Hand’s son, Donnie Hand, has stories, too. One of them is about how the community demanded a winning football team. He remembers walking out of the front door one Saturday morning after the Tigers had lost a game the night before. He came back inside with the newspaper and a question: “Are we moving?” Donnie’s parents didn’t know why he would ask. “There’s a ‘For Sale’ sign in the yard.” Some overzealous fan had decided to help the Hands along with the process of getting out of town.

Don Hand’s career includes much more success than failure. Under his watch for 18 seasons, the Tigers won 125 games, more than twice as many as any other coach in CCHS history. They made the playoffs 13 times. And no, Hand never suffered two losing seasons in a row.

Hand was inducted into the Alabama High School Sports Hall of Fame in 2007. He was nominated by the CCHS principal at that time, Larry Mahaffey. Now there’s an interesting story.

Mahaffey was a star running back on the 1968-70 Tigers football teams. He scored the team’s only touchdown in his first varsity game, a 7-6 win at Shelby County on Sept. 6, 1968. The very next game, at Prattville, Mahaffey was so impressive in a 25-21 win that a local newspaper gave him a nickname: “Freight Train.”

A Prattville newspaper also bragged on Mahaffey—but credited the performance to “the Clanton tailback.” They didn’t mention Mahaffey by name because he was black.

Even if he was one of the first black students at CCHS and on the football team, Mahaffey said he has no negative memories about his school experience—except for maybe when that new coach came strolling into town.

“One of the things coach Hand told me was that a good athlete is a good listener,” Mahaffey said. “I didn’t want to listen. I go through integration, then get a new coach, and this white man is going to tell me about hard times?”

But the more Mahaffey matured, the more he appreciated what Hand told him. That’s why he was so eager to write a letter recommending Hand for the Hall of Fame:

“His leadership and advice changed my way of thinking about what is possible in life,” Mahaffey wrote. “Coach Hand gave a 16-year-old black male hope, which is something I did not have due to not knowing my natural mother and only knowing my natural father for 10 years. Coach Hand often told me of his own journey as a young man and the faith that carried him through his journey. Through him I learned that hope is the belief that joy will come. Now, 30 years later as principal of the school I integrated, this is possible because of coach Hand’s deeds, words and example.”

Hand resigned as football coach after the 1987 season and a 24-0 loss to Greenville in the third round of the state playoffs, but he was far from finished making an impact on the community.

Hand rose in the education ranks all the way to school superintendent. He served as a volunteer coach at CCHS for childhood friend Steve McCord, at Thorsby for former player Billy Jackson, and now back at Chilton for his son, Donnie, who was hired as head coach before the 2011 season. 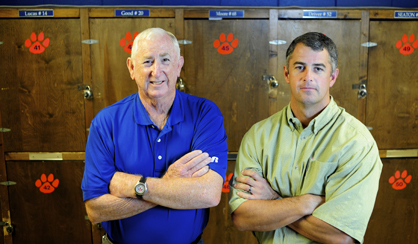 Donnie Hand has followed in his father’s footsteps as head coach of Chilton County High School.

Donnie was somewhat surprised he was offered the opportunity after former coach Brian Carter left. Donnie Hand enjoyed several successful seasons as the school’s basketball coach but had retired to focus on his family and his math classes when the football post came open. His father was one of the first people he called.

“He told me that he wasn’t going to tell me yes or no, but he said he thought I could do a good job,” he said. “Then the conversation turned to, ‘Well, if I take it are you going to help me?’”

The Tigers went 3-7 in the younger Hand’s first season, but the defense improved steadily under the older Hand’s guidance. Defensive tackle Chase Brown said players started to realize that Don Hand’s “old school” approach would work if they trusted it. 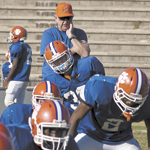 Don Hand worked with Chilton County’s defense this past season, which improved throughout the season. Senior Chase Brown, who was born 24 years after Hand came to CCHS, described the coach’s methods as “old school” but effective.

“He helped us a lot,” Brown said. “We just had to get out there and do what we were supposed to do. I think we were excited to have him out there. It took us a little while, but I think everybody realized what kind of coach he was.”

Hand is still a good coach, but even he admits, “I ain’t as young as I used to be.” He’s had both knees replaced, and the Tigers this season practiced defense first so he could slip away for the offense’s session. The late nights required for games wear on him, and losing even more so.

Still, he knows it will take his son some time to turn things around. He points out that the Tigers have had only two winning records in their last 14 seasons. Reversing the habit of losing can’t be done with a snap of the fingers, and he knows that people want to win now, not tomorrow.

“People want to see a product on the field that they can feel like they got their money’s worth,” Hand said. “You’ve got to have people coming to the games. Mommas and daddies will always come, but their neighbors aren’t coming (if the team isn’t winning).”

Hand plans to help at least one more year. If asked why he does it, he’ll say he just enjoys being around the kids, but there’s more to it than that. He knows he can still make a difference.

One last story. When the Tigers played at Wilcox-Central last season, Hand drove up to the game from Gulf Shores, where he and Linda had taken a trip. He detoured through Frisco City, where he coached before CCHS.

Hand stopped at a hardware store that he remembered as being owned by the father of one of his former players. Inside, he found the player, running the business the same way his dad had. Hand told him he was on his way to coach a football game.

“You’re still coaching?” the man asked, exasperated. “Coach, how old are you?” Sixty-seven, Hand replied. The man was about to remark again about Hand’s age but caught himself and thought for a moment. “Hell, I’m 62!”

It’s a funny story, but Hand tells it also because he’s proud that former player turned out to be a successful businessman. There are a lot of stories like that Hand can tell—Mahaffey and Donnie Hand just to name a couple.

Don Hand won football games and won over the community, but his legacy will be how many other people he helped win in their own lives along the way.