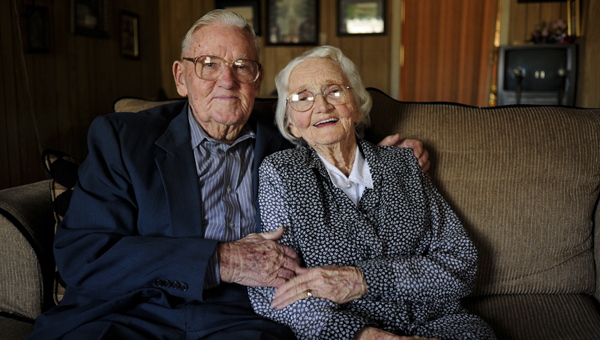 They were just a couple of kids playing in their families’ neighborhood, going to grade school together and enjoying their childhood days before the Great Depression of the 1930s hit.

But on Aug. 1, 1936, Myrtle and Willie Littleton of Clanton went from being a couple of kids to a married couple, and they’ve been together ever since.

This year, the Littletons celebrated their 75th wedding anniversary, a milestone that few couples reach.

“Something about him attracted me,” Myrtle said of their first meeting. “He stood out to me. I don’t know if it’s because I was going to marry him one day or not.”

She stood out to him, too, and before long, they were standing in a pastor’s house on an unseasonably cold summer day, exchanging their wedding vows in front of family and friends.

“We couldn’t afford a church,” she said. “We had to do it as cheap as we could.” 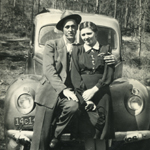 Left, Willie and Myrtle Littleton are shown from 1942, having already been married five years or so by then.

“We were very young when we got married,” Willie said. “I think anybody can get adjusted better while they’re young than they can old.”

Willie went to Southeastern Bible College in Lakeland, Fla. and served in the military from 1942 until 1947, when he joined the ministry.

He was in the medics and combat divisions, and he earned two major battle stars, a good conduct medal, a medical badge and a rifleman’s badge.

He was also in Germany when World War II ended in 1945.

The couple did have to spend a large amount of time apart, however, when Willie was serving stateside. Myrtle said the distance made life tough at times for the two.

“It was pretty bad, but I visited him. He was stationed in North Carolina, and I would go every so often and stay like a month or two near the camp, and he’d come out at night,” she said. “During the war, a lot of times it was hard to get on the buses they were so crowded.”

The couple wrote to each other every day they were apart.

“We sure did. We didn’t have telephones down here then,” Myrtle said. “He couldn’t have called me anyway from overseas.”

They said their marriage hasn’t been perfect, but faith and forgiveness have carried them through the rough patches.

“You have to forgive and forget,” she said. “It was a little hard at times because he had some wild oats to sow, but we made it.”

Myrtle was a Christian before they married, but Willie could not say the same.

“I give her a lot of credit for me being saved,” he said. “I’ll tell you, I’d have been dead a long time ago if I hadn’t turned to the Lord when I was 25. I was smoking a pack a day, Lucky Strikes.”

According to Myrtle, “he was smoking himself to death” until God called him to serve in the ministry.

“After he was converted, he wanted to do something for God, but he didn’t think he could preach,” she said. “God told him he could. He pastored for 47 years.”

Willie was a pastor at Victory Chapel in Clanton for 35 years, and although he considers himself retired, he occasionally delivers sermons at New Harmony Holiness Church up the road from their house.

Although he doesn’t spend as many hours as he used to behind the pulpit, Willie commits several hours every day to reading his Bible.

The Littletons sold their original house to their nephew and his family years ago, and they now live in a 200-year-old log cabin, previously owned by Willie’s uncle, that is located behind the house.

If Willie’s hands aren’t holding a Bible, they are usually wrapped around pieces of firewood.

“He still goes to the woods and cuts firewood all the time,” Myrtle said. “He loves it.”

And when Myrtle isn’t listening to sermons or Gospel music on the radio, she can be found in the kitchen making biscuits on her old-fashioned wood stove, or perhaps in her vegetable garden.

“She loves to garden better than anything else in the world,” Willie said. 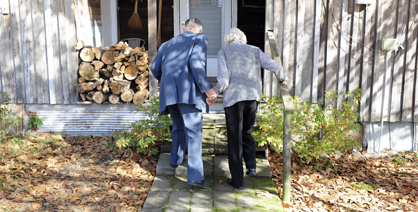 Willie and Myrtle Littleton walk toward the porch of their house, a 200-year-old log cabin in Clanton. The Littletons both grew up in Chilton County and have lived here ever since.

Seventy-five years is a long time to live with another person, but the Littletons have never run out of love for each other or things to talk about.

“We don’t have any trouble,” she said. “I think our faith in the Lord has kept us together.”

“I told her probably we’d both be dead if we’d got somebody else,” Willie said, chuckling. “I told her one time she had to be made for me—woman was made for man, not the man for the woman.”

They celebrated their 50th wedding anniversary in 1986 with a vow renewal ceremony and a brief honeymoon in Montgomery.

“When I married, I married for keeps,” Myrtle said. “I said through thick or thin. The only way that he was going to get away from me was just leave me.”