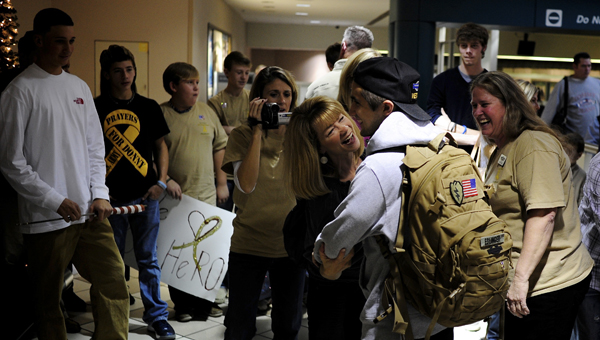 Donny Eslinger and his mother, Mary Sazera, embrace at the Birmingham-Shuttlesworth International Airport as friends and family celebrate his long-awaited homecoming in December.

Donny Eslinger looked like an ordinary 20-year-old walking along the concourse at the Birmingham-Shuttlesworth International Airport on that rainy Thursday in December.

If not for the cheering crowd of family and friends awaiting his arrival with “Donny Strong” signs, he probably could have passed for another college student trying to get home for Christmas.

But if passersby had known where he was about six months ago, they might not have believed their eyes.

Although life-threatening injuries took him out of the fight, they failed to take the fight out of this beloved soldier from Jemison.

In high school, Donny was more affectionately known as “5” on the JHS baseball team.

He spent his childhood with his younger brother Daniel, and his outgoing personality and what his mother calls “that beautiful smile” earned him a coveted place in the hearts of many.

Mary Sazera, his mother, said it was Donny’s lifelong dream to join the Army, and when he turned 18, he enlisted and told her it was done.

Donny was deployed in April last year and was scheduled to remain overseas from one year to 15 months as a private first class of the Stryker Brigade.

“He did not join it for the money,” Mary said. “He felt the need to go fight for his country.”

Donny had just returned to Afghanistan from leave when Afghan insurgents dropped rocket-propelled grenades on his base on Sept. 26, 2011.

Two weeks after being at home with his family, Donny was lying unconscious in an Afghan hospital, with broken bones and bits of shrapnel lodged in his flesh.

Two weeks after saying goodbye to their son, Mary Sazera, Donny’s mother, and Don Eslinger Sr., his father, received a phone call that turned their lives upside down.

Two months ago, against all odds, Donny gained health clearance and the Army’s permission to fly home for Christmas.

He is 20 years old and has endured more in the last six months than many people experience in a lifetime; however, his journey is far from over.

Donny Eslinger is on a mission, and his mission has just started.