CCA comes together to win title 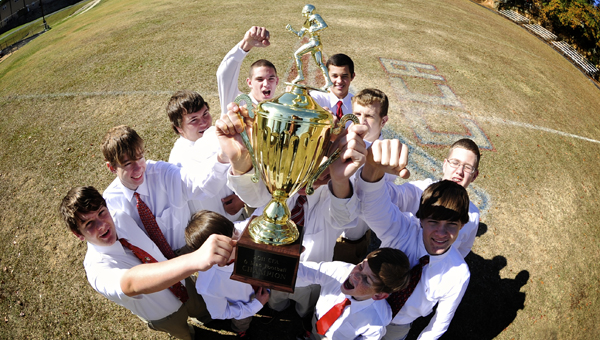 Though Chilton Christian Academy has fielded other sports for years, 2011 marked the first season the school has ever had a football team. The team ended up with 11 players from seventh graders to sole senior Will Hamby, who played quarterback.

It sounds like a Hollywood script — young football team wins state championship just 77 days after taking to the field for the first time ever.

But Chilton Christian Academy’s dramatic title run began more like a ragtag comedy, as the players tell it.

Though CCA has played other sports for years, 2011 marked the first time the school fielded a football team. The Patriots joined the Christian Football Association’s 6-man football league in the spring, leaving just weeks to build a program from the ground up. 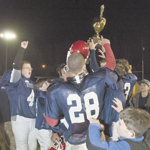 The team didn’t have all of their pads until a day before the first game, which was against Trinity Christian on Aug. 19. There was also last-minute confusion about the new rules.

“We thought that they couldn’t rush the quarterback, but it was that the quarterback can’t rush, can’t cross the line of scrimmage,” said Will Hamby, quarterback and the team’s only senior. “They told me, ‘Hey, Will, they can hit you now.’”

The rule clarification forced the team to completely change its game plan, and they often had to just wing it in that first contest.

“I don’t see how we got some of the plays off. We got into a huddle and called a play and everyone is like, ‘What’s that?’” Hamby said. “I wish we had recorded that game and what was happening. It was funny stuff.”

Funny in hindsight but frantic at the time, said sophomore Carl Mitchell.

“We had been practicing a spread offense, but when we found out the rule we didn’t know, it caused a bunch of chaos,” Mitchell said. “We moved guys around. We really couldn’t run the same plays out of the new formation, so we started making it up as we went.”

The team would lose the game to Trinity, 42-26, and go into an early-season and much-needed bye week.

The team used the extra days to revamp its offense before hosting its first home game Sept. 2 against Faith Christian Academy.

“We felt better about it because we had two weeks to change everything and learn what we needed to learn,” Mitchell said. “During all the preparation, that’s when we really started to grow as a team. After all those hard practices, we realized something good was going to come out of this.”

But hosting the first football game in school history doesn’t come without distractions and a lot of pressure to perform.

“A lot more people showed up than I expected,” said junior Ryan Powell. “Everyone was excited about the first home game. It was pretty cool.”

The team managed to sideline all the hoopla and focus on the game, which resulted in an impressive 58-12 win.

The offense clicked in a game that saw Hamby throw for 88 yards and three touchdowns. Junior Chris Lassinger ran for 120 yards and four TDs.

“We knew we were making history,” Mitchell said. “(Head Coach Todd Stephens) said we would be the first and only ‘first team’ to play football at Chilton Christian Academy, and I think that meant a lot to the team.”

The team found success quickly and reeled off five more wins, most of them in convincing fashion: 51-13 over Brooklane Baptist, 33-0 over Clay County Christian Academy and 43-19 over Conecuh Springs Christian.

The team really hit its stride with the Conecuh win, several of the players said.

“After we won that game, that’s when we got the mindset that we are one of the best teams in the state, and we kept going,” Mitchell said.

The Patriots’ next two wins were rematches against Faith Christian (87-42) and Conecuh Springs (46-40).

“The first Conecuh game, that was a big win for us,” said Hamby. “Beating them that first time was good for our schedule and mentality.”

But with the six-game winning streak came a complacency that Stephens had warned his guys about.

“I’m not going to lie, I felt like we were unstoppable,” Lassinger said.

In the last game of the regular season, CCA hosted Marion Academy, a team that was shut out by Conecuh Springs.

CAA had already beaten Conecuh twice and didn’t give the game the attention it deserved, the team said. The result was a 53-38 loss — the team’s first at home and second of the season.

As Lassinger put it bluntly: “We overlooked them.”

What the Patriots didn’t know was that Marion was missing a star player in its 47-0 loss to Conecuh.

“It was like the coaches told us many times, we aren’t just going to walk out on the field, and they are going to give it to us,” Hamby said. “I thought all we had to do was line up, snap the ball and score.”

The loss was a difficult one and an eye opener.

“All week we had the mindset that Marion is 2-5 … and we went in there and we were like, “Win No. 7, right here,’” Mitchell said. “We goofed off all day, especially in between school and the game. There was a lot of playing around and when we lost that game, we were all pretty emotional in the locker room. Nobody talked for 20 minutes straight. We just sat there.”

The loss caused the players to refocus and work harder than ever. The next game would be the first round of the playoffs and Round 3 of a winner-takes-all series against Conecuh Springs.

“We worked 10 times harder. We worked 110 percent every day, and when we played Conecuh, that was the best game we played all year,” said Ashton Basler.

The Patriots won a thriller of a game, 46-40, to get them in the championship match.

But without the humbling experience the week before, players wondered if they would have beaten Conecuh a third time.

“I think if we had won (the Marion game), we wouldn’t have been able to win the state championship because our heads would have been just that much bigger. It was good for us to lose that game because it woke all of us up,” Mitchell said. “Every tackle against Conecuh and play that game was 110 percent by every player. Whomever we played had it coming because we wanted redemption. And when we won that game we were the most excited all year.”

The win set up a rematch with Marion Academy, the team CCA lost to just two weeks earlier, for a state title.

This time the Patriots would have the upper hand in a 58-50 contest that set the bar high for future CFA championship games.

Though Marion wouldn’t go away, CCA led the entire game. The game was 26-25 at halftime, but Lassinger spent much of the third quarter sidelined with leg cramps.

The loss was an unnerving one considering the Patriots changed their offense for the game, moving quarterback Hamby to a receiver position at times and letting Lassinger throw the ball.

“I was pretty nervous when I saw him go down,” said Hamby.

The team went back to the offense it ran for most of the year and was able to score two more touchdowns before Lassinger got back in the game.

“It was hard watching it (from the sideline). I really didn’t think I was going to be able to come back in, but somehow, I just poured water down my throat and kept going,” Lassinger said. “Eventually, I felt good enough and stretched out enough to come back in.”

A kickoff return for a touchdown by Mitchell late in the fourth quarter gave CCA a 14-point lead and put the game away. Marion added a final TD with a minute to go, but it was too little too late.

Mitchell, who was honored as the game’s Most Valuable Player, said the win was the cumulative of a season of hard work and challenges both on and off the field.

“At the end of the game, when we won, we held up the trophy and just chanted, ‘Glory to God,’ and that was a good way to spread the Gospel,” Mitchell said. “Through the whole season, God had done so much for us, we just wanted to give it back to Him.”

The players say the championship is sweet but that the team gained more than that through the course of the season.

“Before the state championship game, of course, I wanted to win, but that really wasn’t all that important to me because I had already got a bunch of friends and stuff,” Hamby said. “The ring is a bonus for sure though!”

The team finished the season with 11 members and became like a family, players said.

When they broke out of huddles, the team would yell, “One, Two, Three … Family!”

The team will lose its quarterback to graduation, but everyone else should be back next year.

The pressure will definitely be on a team that overachieved in 2011, but if the Patriots can keep the same attitude they had going into the title game, they will come out on top no matter what, Mitchell said.

“I just hope next year we can keep the same mindset we had in the championship game through the whole season,” he said. “If we can do that, I don’t care if we win a game, but if we keep God at the forefront of our minds, and we all grow spiritually, that would be the biggest win.”