3 local fighters to compete in Jackson

“Beat Down in Jack Town” is sold out. 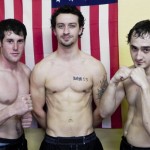 Ready to fight: Nicklous Bussie, Nathan Jordan and Alex Chapman will compete at the “Beat Down in Jack Town.”

Nicklous Lee Bussie will fight in a catch weight of 150 pounds. He usually fights at 145 pounds.

Nathan Randall Jordan will fight in the 155-pound weight division, and Alex Chapman will compete at 165 pounds.

Josh Hubbard, mixed martial arts veteran and coach, invites everyone to a welcome home reception and open house at 2 p.m. next Saturday, March 4, at the Life Brawl gym on Second Avenue North.

Those interested can learn more about MMA, kickboxing, ladies kickboxing, sambo, self-defense and yoga classes offered there. Attendees will also be able to meet the fighters and coaches.

More information at Life Brawl’s Facebook page or by calling Hubbard at 755-0057.