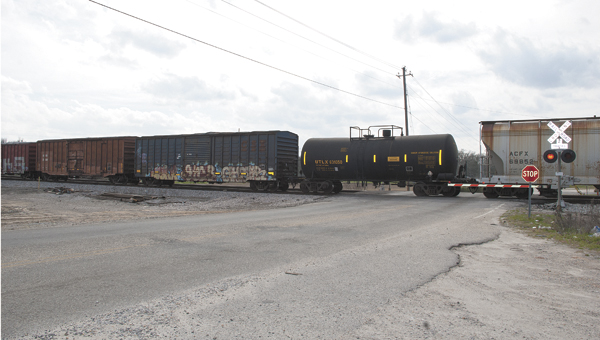 A train blocked the crossing on Jackson Avenue in Clanton for most of the day Thursday.

Trains blocked crossings on Jackson Avenue and Greasy Ridge Road from before 4 a.m. through mid-afternoon.

Police Chief Brian Stilwell said the blocked crossings for long periods of time have been an issue for a couple of weeks. Police officers had to direct traffic three separate times Thursday as well as at times the past two Fridays because of blocked crossings.

When roads like Jackson Avenue and Second Avenue are blocked, all traffic goes to Fourth Avenue (Alabama 22), which has a bridge that crosses over the railroad tracks.

Stilwell said he hasn’t been able to get any information from CSX Transportation, the company that owns the railroad, about the long blockages, but they are becoming a public safety issue.

Fire trucks and ambulances responding to emergencies in the west side of town had to be rerouted twice Thursday. Having to maneuver traffic to go up to Fourth Avenue and then back down can add 4-5 minutes to response times, Fire Chief David Driver said.

It might not seem like a lot of time, but in a worst-case scenario it can be the difference between life and death.

“If someone is not breathing or trapped in a burning building, four to five minutes is a long time,” Driver said.

Calls to CSX Transportation for comment on the blocked crossings were not returned Thursday afternoon.

The closings are also putting on a strain on the other roads than come through downtown, Stilwell said. Large trucks continue to turn onto the blocked streets not knowing they won’t be able to cross for long periods of time.

On Thursday, Clanton officers had to stop traffic on U.S. 31 twice to help 18-wheelers back out of a blocked street.

Having the railroad come through Clanton brings a lot of economic benefit to the area but something needs to be done to cut down on the length of time trains are blocking roads, the police and fire chiefs said.

“There’s got to be a workable solution,” Stilwell said.