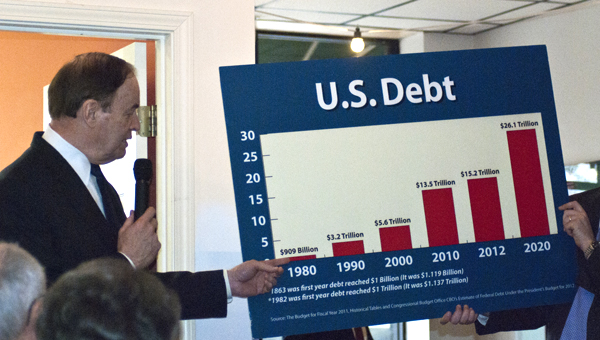 The senator said this November’s general election will determine “what kind of country we are going to have now and in the future.”

“This is a very important election coming up. It affects everything we do,” Shelby said.

Getting the country’s debt under control will be an important part of that process, Shelby said. He cited a figure that said 36 cents of every dollar spent by the federal government is borrowed.

“We should not let a county like ours do this,” Shelby said. “Are we going to get back on the right track or are we going to continue to borrow from the Chinese?”

Shelby said the national debt is the No. 1 issue in this country today.

“There has to be a day of reckoning,” he said.

The senator also talked about the proposed Keystone Pipeline that would have transported oil from Canada to various points in the U.S. — a project President Obama postponed until at least 2013 for environmental concerns.

Shelby said the postponement “defies common sense” and that the pipeline would have created 20,000 immediate jobs and supplied the country with hundreds of thousands of barrels of oil.

“We don’t want them to have nuclear weapons,” he said.

But he cautioned against taking immediate military action.

Questions from the audience focused on spending, energy/Iran and the Department of Education, which Shelby called “a huge bureaucracy.”

He also touched upon immigration, saying he did believe controlling the country’s borders is a job of the federal government — one that hasn’t been done.

“They should do it, but they haven’t,” Shelby said. “We have not immigration policy, do we?”