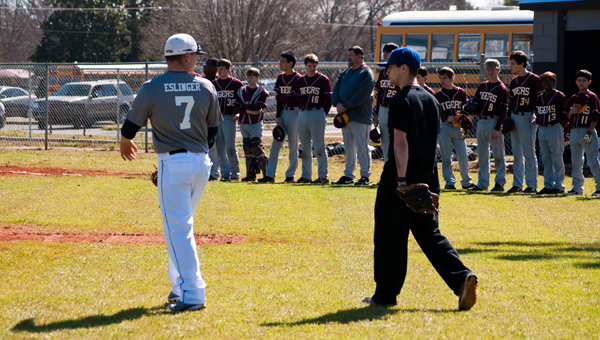 Return to the diamond: Spc. Eslinger (right) threw out a ceremonial first pitch at Jemison on Monday. He is shown along with his brother, Danny Eslinger, who caught the pitch. A former JHS baseball player, Eslinger is recovering from injuries sustained in service in Afghanistan.

The beginning of baseball season in Chilton County was even more special than usual Monday.

The seasons for local teams began when former Jemison player Donny Eslinger threw out the first pitch before the JHS junior varsity home game against LAMP.

Eslinger was seriously injured in September 2011 when rocket-propelled grenades were dropped on his military base in Afghanistan. He recently returned home to Jemison as he continues to recover.

“We were able to get the uniforms, and with it being Presidents’ Day…it was perfect,” JHS Principal Alan Thompson said.

The Jemison teams wore special jerseys with “Panthers” printed in the red, white and blue of the American flag, and “SPC Eslinger” was added to the sleeves.

Lester Henderson said he and the other LAMP coaches were aware of the ceremonial first pitch and talked to their players about its significance.

“A lot of our guys remember him,” Henderson said of the 2010 JHS graduate. “It’s great. We’re glad to see him out here.”

Jemison’s Jackson Mims went 2-for-3 at the plate with a two-run home run in the varsity game.

Both CCHS and Jemison played second games Monday evening that ended too late to be included in this edition.

Just down the road from Jemison, in Thorsby, the Rebels opened their season with an 11-1, five-inning win over Verbena.

The visiting Red Devils took a 1-0 lead in the top of the first inning when Jesse Ellis’ single brought home Christian Coston, but THS starting pitcher Brantley Maddox settled down and didn’t allow another run while striking out six batters.

The hosts’ offense, meanwhile, scored early and often: three runs in the bottom of the first inning, five in the fourth and three in the fifth.

The game was ended early on a Parker Bryan sacrifice fly that plated Bo Hoffman.

Denham Childers, Jace Maddox and Jason Price all had multiple hits in the game for Thorsby.

Maplesville weathered a late Isabella rally to down the Mustangs, 10-5.

The visiting Red Devils led 10-1 going into the bottom of the seventh inning.

MHS led 2-1 after two innings and scored two runs in the third inning and blew the game open with four runs in the fourth inning, three of which came on a bases loaded double by Brett Walker.

Aron Smitherman started on the mound for Maplesville and earned the win. 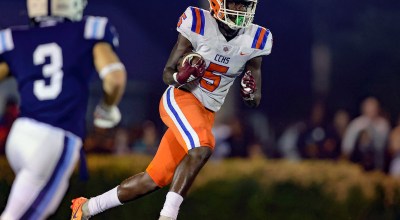