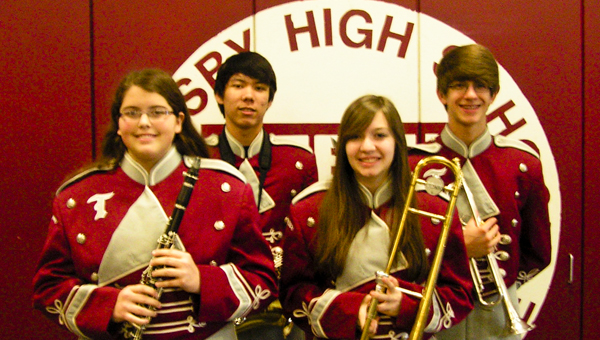 Pictured are (left to right) Adrienne Ellison, Kyle Burdges, Danielle Headley and Samuel Gasson. They will be attending the Alabama Bandmasters Association District V Honor Band at the University of West Alabama in Livingston, Feb. 24 and 25.

Members of Thorsby High School’s Band, the Southern Pride Rebel Band, will perform Feb. 24 and 25 in the Alabama Bandmasters Association District V Honor Band at the University of West Alabama in Livingston.

Sophomore Samuel Gasson made first chair in the district honor band for the second year in a row, as well as the Alabama All-State Red Band.

Sophomore Adrienne Ellison made first chair in the district honor band for the second consecutive year, too.

Senior Kyle Burdges made second chair in the district honor band this year after making first chair in 2011.

Gasson, Ellison and Burdges will also perform with the Alabama All-State Honor Band, which is comprised of four bands.

The Red band is the top group in the state.

Gasson made the Red band last year and has made it again this year.

Ellison and Burdges, who both made the White band last year, will audition for their placement in the All-State Honor Band, April 19-21 in Mobile.

The middle school honor band consists of first-, second- and third-year players but will change to only sixth, seventh and eighth graders next year.

First- and second-year beginners at the ninth grade level will no longer be eligible for the middle school honor band.

“Some people think that band is over at the end of football season. They think we only practice in the summer during band camp,” Pounders said. “They couldn’t be farther from the truth. The band is a vital part of the school, bringing life to the pep rallies, parades, football games, Veterans’ Day program, Christmas band concerts and spring band concerts.”

The THS Band has had students in the Alabama All-State Honor Band every year since 1994, when Bobby Janney, Thorsby’s first All-State member, played the tuba in the Junior High All-State Band.

Since then, 68 students from THS have made the All-State Band, 26 of which have made it under Pounders’ direction.

Pounders has been the band director at Thorsby since 2003.

“The band practices every day, getting ready for their next performance,” Pounders said. “There are honor bands that the students can go to every weekend, the second semester of school.”

Additionally, Pounders said every college in Alabama hosts an honor band to bring students to their campus each year.

“Students are also involved in solo and ensemble competitions each spring,” Pounders said. “The students practice individually and in small groups such as duets, trios and quartets. (They) play in front of a judge, and they are graded on their performance. The students are always striving for superior ratings to get that hard-earned medal.”

“Not only is learning to play your instrument correctly important, but listening to other groups perform is just as important and is a part of the Alabama Course of Study for all music programs in the state,” Pounders said.