Had the EF-2 tornado that came through Maplesville on Jan. 23 stayed on its original track, the twister would have also come through downtown Clanton, according to Kevin Laws with the Birmingham National Weather Service.

Laws spoke to the Clanton Lions Club on Friday about the January storms, the generational tornado outbreak from last April and severe weather preparedness. 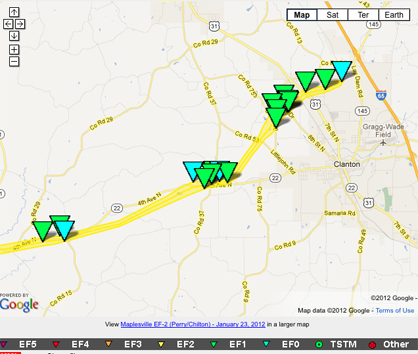 This storm track from the National Weather Service shows the Maplesville tornado took a sharp left turn after it crossed the intersection of Alabama 22 and Chilton County 37.

The tornado that came through Maplesville took a sharp left turn as it neared Clanton, passing north of the downtown area. Had the twister remained on its original track, it would have passed near the courthouse and Chilton County airport, Laws told the club.

Information, including wind speed, tornado tracks and photos from damage assessments, can be found on the weather service’s website, srh.noaa.gov/bmx.

The weather service survey showed the Maplesville twister touched down in Perry County just west of the Cahaba River. Wind speeds strengthened up to 125 miles per hour as the tornado neared Alabama 183. 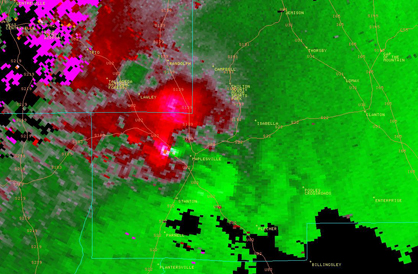 This radar image shows the storm’s velocity as the tornado approached Maplesville the morning of Jan. 23. For more maps, radar data and photos from storm surveys, visit the weather service’s website, srh.noaa.gov/bmx.

Wind speeds topped out at 130 mph as the storm crossed U.S. 82 and then passed just north of downtown Maplesville. The tornado weakened to 95-105 mph winds as it straddled Alabama 22 before taking a noticeable turn toward Lomax. The twister eventually lifted before Alabama 145 near the Peach Tower exit.

Though the Maplesville/Lomax tornado was not the strongest one of Jan. 23 (the Center Point twister was rated EF-3 and killed one person), it was on the ground the longest, Laws said. The damage path was 39.5 miles long; the Center Point storm was second with damage stretching out for 15.5 miles.