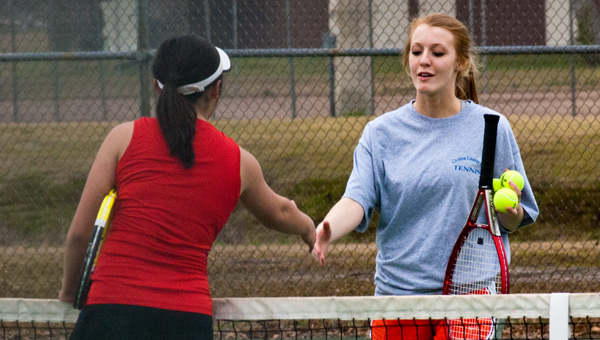 Chilton County’s tennis teams this season should feature an effective mixture of returning players and newcomers.

Both the boys and girls Tigers opened the season with wins over Wetumpka on Feb. 7. 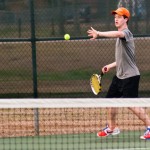 Eye on the ball: Chilton County’s Chase Baker lines up a shot during a match Thursday against Thompson.

Several players were competing in their first varsity matches.

“They all did great,” coach Emily Espenan said. “Some of them were nervous because it was their first time to play high school tennis, but they did fine.”

The boys have two new players: Weston Harris (who competes at the No. 3 singles position) and Andrew Cantley (5).

Harris, a senior, is a former baseball player who is an example of how tennis teams change every year because it is a sport that sees upperclassmen decide late in their high school careers to give it a shot.

“I’m lucky because a lot of them have natural ability,” Espenan said.

Lyn and Russell make up the No. 1 doubles team, followed by Harris and Baker.

This season, the girls squad features a No. 1 player, Ada Ruth Huntley, who is a seventh grader.

Another newcomer is freshman Caitlyn Smith at the No. 6 position.

The Tigers will be anchored by the 2-5 positions—Anna Adams, Laura Evans, Mary Colby Kelley and Krissi Jones, respectively—who are juniors and returning starters.

CCHS hosted Thompson on Thursday. The Chilton girls lost 9-0, but the boys won 8-1, bringing their record to 2-0 on the year.