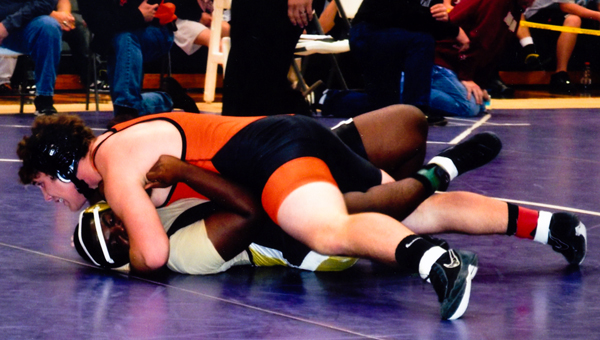 Justyn Jackson may be only a sophomore making his first appearance at the state wrestling meet, but he is familiar with the event.

Jackson served as a scorekeeper last year when his brother Dylan, then a CCHS senior, finished second at the Class 5A meet at Huntsville’s Von Braun Center.

Colby Bernier also finished second in the state last season in his weight class, and he and Dylan Jackson have been helping Justyn prepare for the event.

The Jacksons started wrestling when Dylan was a sophomore and Justyn was a seventh grader.

Now, Justyn will have a chance to make his mark on the sport’s signature event.

“It’s definitely the biggest,” he said. “I believe I’ve got a shot to win it this year, or maybe at least one of the next two years.”

Jackson went into the Section 1 meet last week as the No. 4 seed in the 220-pound weight class. The top four seeds advance to state, and Jackson had already wrestled many of the competitors at the meet, so he thought he had a good chance to advance.

Jackson pinned Jonathon Morris of McAdory in his first match of the meet, but was pinned in the semifinals of the championship side of the bracket by Barrett Crossley of Pinson Valley.

The deciding match for Jackson came in the consolation side of the bracket against Walker’s Torrelle Young, whom Jackson had defeated just days earlier in a meet at Calera.

Jackson was already ahead 4-0 on points but pinned Young to end the suspense.

“I was pretty psyched,” he said.

He is following in the footsteps of his brother but also a longer line of CCHS wrestlers. The program has sent at least one wrestler to the state meet in each of its five years of existence.