Two weeks ago, Donny Eslinger, 19, of Jemison was at his mother’s house on leave from his first tour of duty for the United States Army in Afghanistan. 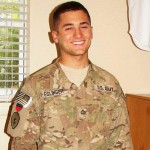 Two days ago, Eslinger was rushed to a hospital somewhere in Afghanistan.

Sazera was told that her son had been severely injured by rocket-propelled grenades dropped on his base by Afghan insurgents.

Eslinger and his unit had just returned from their leave when it happened.

“They were inside their base where they felt pretty secure, and they were attacked,” Sazera said. “We have been told that he (Eslinger) pretty much took the brunt of it all.”

Eslinger sustained punctured lungs, broken ribs, a broken leg, kidney damage and a “sucking chest wound.” His spleen had to be removed, and although he has fluid on his brain, Sazera said the doctors told her it was normal, considering what he’s been through.

“He didn’t know the extent of his injuries,” Sazera said. “His fellow soldiers have been credited with saving his life. It is a brotherhood.”

Sazera said her son will greatly miss his fellow soldiers when he is transferred back to the U.S. for further treatment and recovery.

Eslinger’s unit was assigned to three southeastern Afghanistan provinces, which include the city of Kandahar. He and his fellow soldiers were specifically trained for the role of fighting on foot, or “boots on the ground,” to engage the enemy face-to-face.

Eslinger completed Infantry training at Ft. Benning, Ga. and was sent to Ft. Wainwright, Alaska, where he is stationed. He is assigned to the 1st Battalion, 24th Infantry Regiment of the 1st Stryker Brigade Combat Team, 25th Infantry Division, Bravo Company at FOB Bullard.

Eslinger was deployed in April this year and was scheduled to remain overseas from one year to 15 months as a member of the Stryker Brigade.

Sazera said Eslinger is almost stable enough to be transported to Germany, and then to a military hospital in the United States.

“I just want everybody to know how grateful I am for all the prayers and support,” Sazera said. “The U.S. Army has been unbelievable in making us feel like our soldier was the only soldier on that battlefield that was injured. He has received the best possible treatment.”

Sazera said her son is mentally and physically prepared to handle his recovery, but he would not want all the attention.

“He won’t think he’s a hero by any means, because he’s left his other soldiers behind,” Sazera said. “I know if he could right now, he would be telling me not to worry about him.”

Sazera said Eslinger’s lifelong dream was to join the Army, and when he turned 18, he enlisted, returned home and told his mother it was done.

“He did not join it for the money,” Sazera said. “He felt the need to go fight for his country.”

According to his mother, Eslinger did not let much get to him. He wasn’t afraid to tell people what he thought or what he stood for.

Two days before he left Jemison to return to Afghanistan, Eslinger got a tattoo of daisies, his mother’s favorite flower, with the phrase “I sacrifice for those I love,” which is from a sheriff’s badge worn by his father, Don Eslinger.

Eslinger has a host of other family members who love and support him, including his brother, Daniel, 16, who is a junior at Jemison High School.

“The day I got the phone call was a path I had never planned to take in my life,” Sazera said. “It stopped my world cold. I’m just overwhelmed at the support and prayers.”

Sazera said she posts updates on her Facebook profile as soon as she receives them. On Monday, she was told he is well enough to be flown to Germany in the next few days.

Event to focus on helping residents land a job