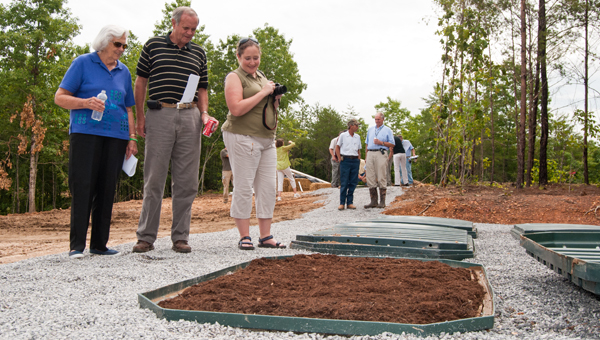 The system, which utilizes peat instead of traditional methods, gives the park a permanent disposal solution and should improve the government-protected Buxahatchee Creek watershed.

Minooka Park opened with a 10,000-gallon septic tank that was emptied every couple of months or so. The contents were taken to a Calera wastewater treatment facility that recently stopped taking sludge from outside the city.

“They were at the point where they were going to have to have another system engineered,” said Glenn Littleton, coordinator of the Buxahatchee Creek Watershed Restoration Project. “It’s a win-win.”

Littleton worked with others to obtain grants through the Alabama Department of Environmental Management for a system that would produce cleaner runoff.

The bid for the project was $79,200. $54,913 came from grants, and the Chilton County Commission voted unanimously to foot the bill for the remainder.

The result was on display Thursday: a modern system that uses peat, a soil-like material found in bogs and made up of party decomposed plants, to purify water to 90 percent instead of 40 percent like standard septic tanks. Treated wastewater from both the peat-based and standard systems finds its way into the watershed.

“At some point, it’s going to become part of a stream or something,” Littleton said.

The system will treat waste from RVs and restrooms inside Minooka Park.

The tank originally installed will be used as a holding tank where solids are filtered before the water is carried to a group of 12 peat modules.

The peat, which was brought in from Ireland, is loaded with bacteria, which helps break down the waste. The peat should last about 25 years before having to be replaced.

The only electrical components of the system are a 10-watt aerator and a 1/2-horsepower pump.

“In my opinion, this system is more ecologically sound, more energy efficient than a municipal septic system,” Allen McLemore, who engineered the system, said Thursday.