The Alabama Senate and House voted Thursday afternoon to approve a new Congressional map that would keep Chilton County in the 6th District. 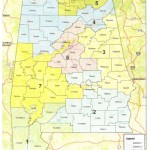 CLICK FOR MAP: State Sen. Cam Ward provided The Advertiser with this map of the Congressional districts approved Thursday by the Alabama House and Senate.

The Senate action is contrary to a vote last week that would have moved the county into the 3rd District.

A House committee rejected that plan earlier this week, instead favoring the map the Legislature’s reapportionment committee recommended a couple of weeks ago.

That put the Senate and its plan back on the drawing board. This time around, the Senate approved a plan that kept Chilton County in the 6th District, though it would lose northern Tuscaloosa County to the 4th District and St. Clair to the 3rd.

In addition to retaining all of Chilton, Bibb and Shelby Counties, the 6th District still has most of the Birmingham suburbs and it gains all of Coosa County.

Local State Sen. Cam Ward, who served on the reapportionment committee, said he is glad to see a plan approved that keeps Chilton County with the Birmingham-metro area.

“Chilton County is back where it should be and I’m very happy with the results,” Ward said.

The measure came up for a House vote late Thursday night, and passed, Ward said. The U.S. Justice Department must still sign off on the new districts.

Check back for updates on this developing story.

Firefighters work to put out a camper fire near Lomax Thursday. No one was injured in the blaze. A fire... read more