A 19-year-old Chilton County man faces burglary charges after a pawnshop was broken into over the holiday weekend. 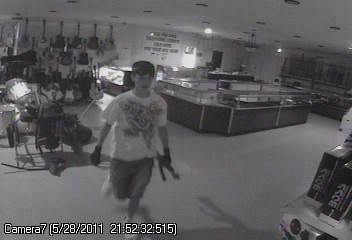 At approximately 10 p.m. Saturday night, Clanton officers responded to an alarm call at Advance Pawn, on Seventh Street North. When they arrived on the scene, they found the door had been broken and property had been taken, including a rifle and jewelry.

Detective Whitney Ray and officers Chris Wilson and Donald Giles were able to identify the suspect and his vehicle from surveillance video.

The suspect, Michael Aaron Little, 19 of Chilton County, was later arrested at his residence on County Road 28 on charges of burglary third, criminal mischief second and theft of property second.

After getting a warrant to search the residence, detectives recovered all of the missing property from Advanced Pawn.

“We have seen an increase in thefts of all types in the past few months,” said Capt. David Clackley.

Clanton’s seven detectives are currently working a total of 155 active cases, according to Clackley.

Officers were able to move so quickly in the case because of the videotape, he said.

“This offense is an example of the business owner taking security measures to assist in the investigation,” Clackley said. “As the rise in thefts continues, so does the need of security systems in both business and residential applications.”

Anyone with information that might help Clanton PD with an investigation may contact the secret witness line at 755-1416.

An Alabama House committee recommended a redistricting map Tuesday that would keep Chilton County in the 6th Congressional District. The... read more