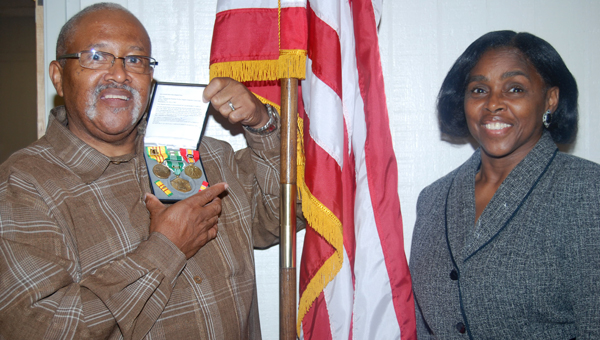 Several representing the U.S. Military were recognized during the program.

Third, fourth, fifth and sixth graders recognized fallen soldiers, those who have served and those currently serving.

The program opened with a poem read by Mitch Thrower, and Dr. Joe Ardovino gave a trumpet performance.

After the Pledge of Allegiance, fifth and sixth grade students sang “The Star Spangled Banner” and “Mighty United.”

The guest speaker for the program was Spc. Edward Cargle, who fought in the Vietnam War.

Cargle served 20 months in the U.S. Army and was proud to share his pictures, awards and his story.

In his opinion, the most important subjects in school are math and reading, he said.

“If you can read you can understand what you’ve read, and if you can count you will never be cheated,” said Cargle.

He continued and spoke about his journey, experience and achievements in the U.S. Military. He encouraged the students and, after his speech, was presented with a token of the school’s appreciation.

Third and fourth graders sang “The Heart of America” in recognition of all the veterans in attendance and “Armed Forces Medley.”

Students who submitted names of family members who have served or are serving in the military were called on stage one by one to receive pins to give to their loved ones.

In addition, veterans in the audience who were not recognized were told to stand and received pins as well.