The blink of an eye.

That’s how much time it takes for life to go from normal and routine to chaotic and uncertain.

Just ask Maplesville’s Robert Holloway. In just a few seconds, he went from being an average college student to being unsure if he was going to see the next day.

A Feb. 15 farming accident has Holloway without feeling in his left leg but a newfound appreciation for life.

“I woke up that day and just went to work,” Holloway recalls. “I was getting ready to leave when I remembered something I needed to do on a Bush Hog. I crawled up under it and started to cutting excess plastic off the blades.”

That’s when he began to notice something wasn’t right.

“I saw that the pneumatics [holding it up] were slipping,” he said. “I managed to get everything out but my left leg.”

With the weight of the 1,500 pound machine bearing down on his leg, Holloway knew he needed help fast. Helplessness began to sink in.

“Within five minutes, I couldn’t feel my leg anymore. I left my phone in my truck, and since it was about quitting time, no one knew I was down there,” Holloway said. “The first hour [I was trapped] I was screaming ‘Help me!’ but the nearest house was 700 yards away.

After some time, the 22-year-old said he found some solace.

As time ticked away, minute by painful minute, Holloway said he could hear his phone going off in his truck, people calling to check on him with no way of knowing where he was. Finally, after six long hours, help came. 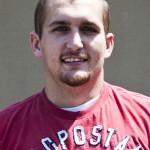 After an farming injury in February, Robert Holloway has no feeling in his left leg, but a new appreciation for life.

“My boss came down to where I was,” he said. “I saw his headlights coming. I’ve never been that glad to see headlights in my life.”

After being trapped under the machine for that long, the damage was done. Doctors at Chilton Medical Center gave him pain medicine and sent him immediately to UAB.

Once at UAB, Holloway’s family and girlfriend of four years, Kacy Green, joined him. By this point, between the medication and the excruciating pain, Holloway doesn’t remember anything.

“They put him in a medically induced coma in hope that would help,” said Green. “He was in and out of a coma for 30 days.”

As if the coma weren’t bad enough, Holloway’s problems were just beginning. He was diagnosed with Compartment syndrome, acute renal failure (for which he was put on dialysis) Acute Respiratory Distress Syndrome, and then pneumonia (twice) on top of a lung infection. Doctors had to put in a trachea to help him breathe.

Doctors were doubtful he would make it out of the hospital, let alone be able to keep his leg.

“There were 26 days of no hope,” said Green. “They called [Green and Holloway’s mother] in and gave us a box of tissues the Sunday night after it happened, and told us to say our goodbyes.”

Then, after 26 days, Holloway came out of it.

“I had no recollection of what happened,” he said. “After [Green] told me what happened, and walked out of the room, I broke down. I was on good terms with my family, but still, the thought of never getting to tell my mom I love her again just got me.”

What Holloway was unable to see was the support from those in the community for him. His friends put on a roadblock in Maplesville to help raise money for him, and Pletcher Church, where he is a member, raised funds through a doughnut sale to help support him and his family.

“We stayed at UAB for 50 days,” said Green. “We had no money for food really, so the community was great to us.”

Once out of the hospital, Holloway was able to become more and more mobile. He told his story to church groups, as a means of giving back to the community that helped him in his time of need.

“Prayers had a huge part in helping me,” he said. “The least I can do is speak. Anyone who wants me to speak [to their group], I’ll do it.”

“Churches ask him to speak because he was on their prayer lists for so long,” said Green. “They want to see who he was, and we enjoy meeting the people.”

The road to recovery is a long one. Holloway is able to move around, short distances with a walker, long distances with a wheelchair. He goes to therapy at Cornerstone Fitness twice a day, five times a week. He has no feeling in his left leg, and only recently has regained movement in his left foot.

Still, he has his left leg intact after doctors were fearful he would lose it.

“Just to have his leg means he has a chance to get the use of it back,” said Green.

“It’s a miracle,” said Holloway. “[The doctors said] most people that have something like that happen develop a blood clot to their heart in the first 20 minutes and die.”

All the while, Holloway has a ways to go to regain his old life, and he acknowledges that with nerve damage, there’s no guarantee that will happen. But with his faith still strong, he remains positive and expresses his thanks to all those who helped him.

“I just want to thank all the churches, anyone who participated in the fundraisers, the people who prayed, and Cornerstone Fitness for therapy, and being so good to me,” he said.

Prior to the incident, Holloway was a student at Jefferson State Community College in Clanton, and was planning at transfer to Auburn in the spring to study horticulture. His plans have been altered, and Holloway says his view of life has been too.

“I have a different perspective,” he said. “I don’t take things for granted. I don’t expect things. I went from a normal person one day, to not being able to sit up without getting sick the next.”

Local ministers have faith in Bible, not human predictions

It was announced and heavily advertised by a loosely organized Christian group that the world will be coming to an... read more