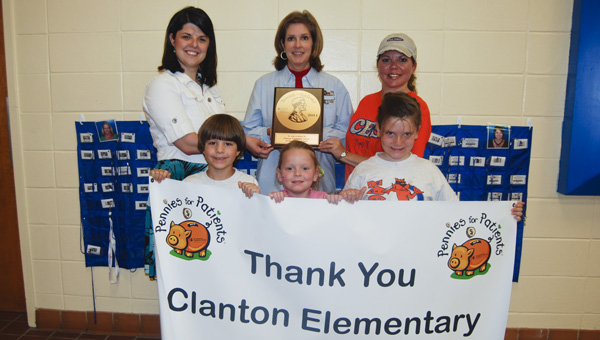 Shelley Smith, campaign coordinator for the Leukemia and Lymphoma Society (Top Left) with Principal Rebecca Threlkeld, Maria Porter, teacher/event coordinator and three CES students after the school was recognized for raising the most money in the state for the Pennies for Patients fundraiser. The sign reads Thank You Clanton Elementary Way To Go!

Clanton Elementary School was recognized Wednesday by the Leukemia and Lymphoma Society for raising the most money in the state for last month’s Pennies for Patients fundraiser.

The school raised $5,151.28, the most raised out of 280 participating schools. Shelley Smith, campaign coordinator for the Leukemia and Lymphoma Society, presented the school with a banner and plaque during an assembly Wednesday afternoon.

Walmart gift cards were also awarded to the classrooms that raised the most money for each grade level.

Also during the assembly, principal Rebecca Threlkeld recognized Jensyn Porter, a Clanton Elementary School student who was diagnosed with leukemia in 2008.

Jensyn was selected as one of the Pennies for Patients campaign’s “honorary patients” for the program. Her picture was on the campaign’s poster in every participating school.

Smith brought cookies for the students to take home, and when she asked if they were excited to participate in the fundraiser next year the assembly let out a loud “Yea!” and ended with a “Yay CES!”