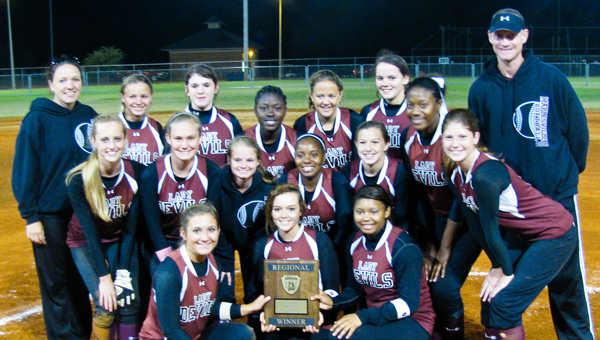 Maplesville's softball team won the Class 1A South Central Regional on Saturday to advance to the state tournament.

Maplesville will make its second consecutive appearance in the Class 1A state softball tournament after winning the South Central Regional this past weekend.

The Red Devils on Saturday defeated Verbena, 11-3, to advance to the championship game, which ended in a 9-2 MHS win over Wadley.

Verbena was eliminated with the loss, and Maplesville became the only local team still alive in the playoffs.

Maplesville will play South Lamar at 9 a.m. Friday in the first round of the state tournament at Lagoon Park in Montgomery.

After a lackluster regular season, the Devils advanced to state in dominant fashion thanks to the emergence of another hitting threat and the luxury of having two pitchers capable of winning anytime they step into the circle.

“Everything seems to be coming together here at the end of the season,” coach Ashlie Harrison said. “We played a lot more games this year than we usually do, and it was to get us ready for this point.”

In her first year of varsity softball, first baseman Kiana Andrews was her team’s best hitter in the regional, held at Troy University.

Andrews hit her first career home run Saturday against Verbena and tallied her second four-bagger in the nightcap against Wadley.

The sophomore went 8-for-15 in the tournament with eight runs batted in.

Andrews hits in an important spot in the lineup, behind cleanup hitter Courtney Killingsworth, who has been the team’s most consistent hitter all season.

Andrews, Natalie Arnold and Autumn Smith all had two hits in the championship game.

Smith and Courtney Killingsworth, meanwhile, combined for four pitching wins. The pair allowed 13 runs on 22 hits and five walks in 26 innings while striking out 33 batters.

Killingsworth was the winning pitcher against Verbena, and Smith earned the championship game win.

“When they’re both on, they’re really good,” Harrison said.

Smith batted for a .375 average in the tournament with a walk, five RBI and nine runs scored.

The Devils will practiced Monday and will again on Tuesday and Wednesday. They’ll leave for Montgomery on Thursday evening and stay overnight to avoid traveling early Friday morning.

Maplesville will play for the Class 1A South Central Regional softball championship Saturday after defeating Verbena, 11-3. As one of... read more