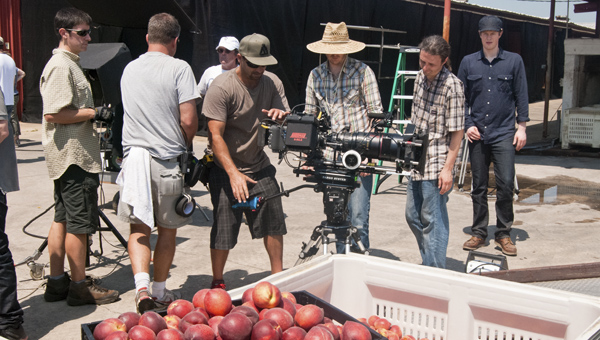 Crew members with the Martin Agency production company set up cameras Wednesday at Jimmy Durbin Farms while shooting a commercial for Walmart, which purchases peaches from the local grower.

This week, some of Chilton County’s peaches found themselves in the national spotlight.

Material for a commercial promoting Walmart’s efforts to increase the amount of locally grown produce it offers was shot at Jimmy Durbin Farms, just off County Road 37 between Clanton and Billingsley.

Jimmy Durbin said he’s pleased with the publicity his business will receive.

“We’ve been selling to Walmart for 18 years,” said Durbin, who oversees more than 500 acres of peach trees. “A big part of our peaches go to Walmarts in the Southeast and even the Midwest.”

Walmart announced in October 2010 that it wanted to double the amount of locally grown produce sold by 2015.

The commercial highlighting the process of producing peaches at Jimmy Durbin Farms is part of a marketing strategy for the locally grown initiative.

“Buying local makes sense for us the way it makes sense for everybody,” Walmart spokesman Kory Lundberg said. “The produce is going to be fresher, it’s going to last longer, you’re going to cut down on all the shipping costs.

“The commercial is highlighting one of those local farmers. It helps people to see this is the actual farmer, this is where your peaches are coming from. It helps if I know I’m buying an Alabama grown peach in my store.”

Lundberg said he expected the commercial to air later this spring or sometime during the summer.

Thorsby hosts Class 2A No. 1 Leroy on Friday in the semifinal round of the state baseball playoffs. To get... read more