Law enforcement officers in areas affected by the April 27 tornadoes have been working around the clock to help citizens in need.

Their brave work is remarkable, especially considering many of these same departments were destroyed or sustained heavy damage. 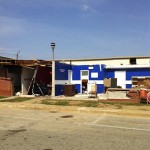 The Hackleburg Police Department was destroyed by the April 27 tornadoes.

The departments that didn’t take a direct hit still find their resources are being stretched to the max.

Sgt. Neil Fetner of Clanton PD was able to secure 10 laptop computers and wireless Internet cards to donate to these departments.

The equipment was given to departments hit hard by the storms. In Hackleburg, a few interior walls are all that’s left of their police department.

“The (Hackleburg) chief told me that of 31 businesses they have in town 30 were destroyed,” said Clanton Police Chief Brian Stilwell. “The major employer of over 400 jobs, Wrangler, was wiped out. It was a sad sight to see.”

“So many people have given so much, and I want to thank them all,” said Stilwell. “A special thanks to Pinnacle Networks, Verizon Wireless and SouthernLINC who has helped us help others.”

The Clanton Police Department is still collecting food, toiletries and other items for storm victims, but monetary donations may be the best way to help now, Stilwell said.

“While we will still collect supplies, it has been suggested that the best way to help now is through financial contributions to agencies like the Red Cross and the United Way that will assist in shelter and rebuilding,” Stilwell said. “I am proud of our city and state. So many have given so much, and I appreciate that the mayor and council allowed us to help. The city of Clanton was well represented.” 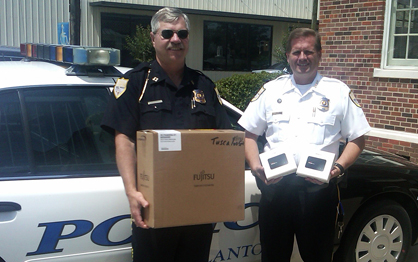 Clanton Police Chief Brian Stilwell and Capt. Freeman Ellison shown with one of the laptop computers and two wireless Internet cards that Clanton PD donated to departments affected by the April 27 tornadoes.