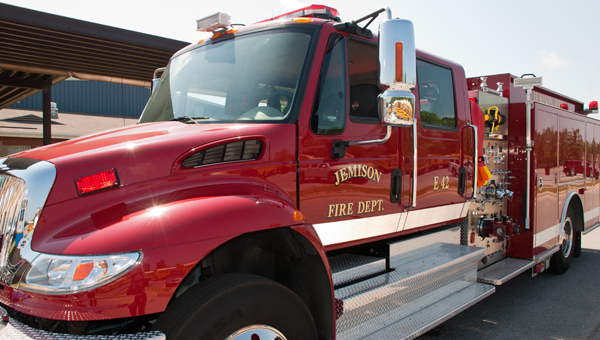 Most of the money used to purchase a new truck for the Jemison Fire Department came from a federal grant.

Jemison Fire Department has a new truck thanks to a grant announced in December 2010.

The truck was put into service Monday and was being shown off Tuesday at Jemison Elementary School’s Career Day.

But the vehicle will benefit the city in more important ways.

Jemison now has three Class A pumpers, which are important because they allow firefighters to put out fires even if no hydrant is near.

The vehicle cost $243,000. A federal Vehicle Acquisition Grant, announced by Congressman Spencer Bachus, covered about $232,000, and the city of Jemison had to match the 95-percent-to-5 percent grant with about $11,000.

Jemison’s new truck replaces a 1975 model that could no longer be used.

The new truck arrived with all necessary equipment, meaning JFD didn’t have to take anything out of service on another truck to equip the new one.

The department also received a grant for more than $61,000 for the purchase of safety equipment.

The Rev. Wayne Hughes of the Church at Bethel leads the closing prayer last Thursday during Thorsby’s prayer service. BY... read more