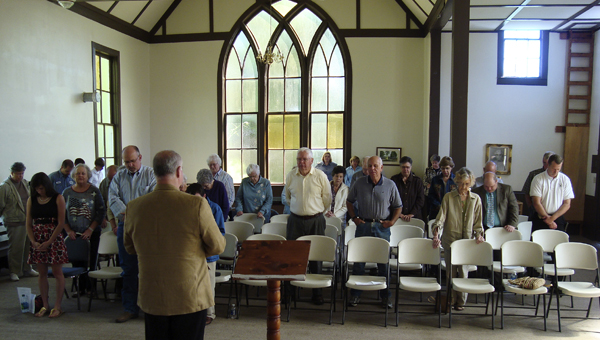 The Rev. Wayne Hughes of the Church at Bethel leads the closing prayer last Thursday during Thorsby’s prayer service.

The town of Thorsby celebrated a Day of Prayer at Helen Jenkins Chapel on Thursday, May 5.

Hosting the event was the Rev. Von McQueen, who introduced all of the speakers that came together for this event. 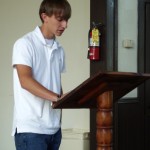 Taylor Gunn leads a prayer for our nation’s military men and women. Gunn’s brother is currently serving with the Marines in Afghanistan.

Anna Grace Hilyer opened the ceremony with the Pledge of Allegiance.

Taylor Gunn led a prayer for our armed forces. Gunn’s brother is currently serving with the Marines in Afghanistan.

The Rev. Philip Wigley of Thorsby First Baptist Church sent up a prayer for our schools and our youth. He prayed that we build a stronger youth community and expressed how pleased he was with his youth group’s response to the recent tornadoes. He said that his phone was ringing off the hook just moments after the devastation from members of his youth group wanting to help out in any way they could. He said he has seen the same sentiment at many other churches and their youth groups during this time of need.

The Rev. Wayne Hughes from Church at Bethel led prayers and sang “Amazing Grace” while playing guitar. Dana Lawrence also sang “Standing On Holy Ground” as well as other songs during the service.

Howard Smith stood in for Pates Chapel’s pastor, Clint Harris, who was working with members of his congregation on a three-day trip to assist tornado victims in the Birmingham area. Smith led prayers for all of the elected officials of Thorsby and also the city workers.

Terry Jackson came to the pulpit and boldly sang “God Bless America.” His thunderous voice rolled around the chapel, reminding everyone of how wonderful it was to hear singing in this historic church once again.

Thorsby council members voted at Friday’s council meeting no smoking or smokeless tobacco will be allowed outside of designated areas... read more