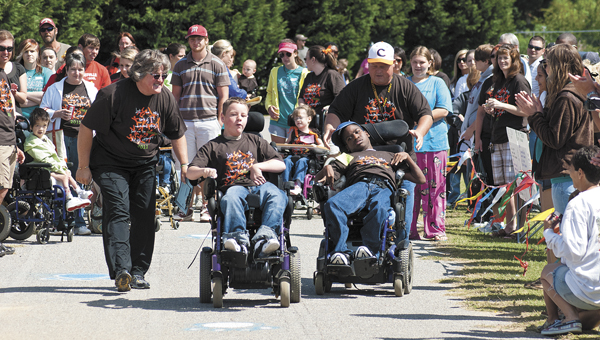 Taylor Robinson, left, of Thorsby and DeMario Cleckley of Chilton County High School are encouraged by Sandra Sims as they compete in the wheelchair race event at the Chilton County Special Olympics on Thursday at Clanton City Park.

With an eventful day of fun, races and awards, the 2011 Chilton County Special Olympics commenced Thursday at Clanton City Park.

Teachers, students and parents from all over the county gathered to participate and support the annual event, as 100 student Olympians participated in numerous sporting contests. 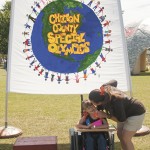 Madison Johnson of Clanton Elementary School is congratulated by her mother, Dawn Johnson, after Madison earned a gold medal in the wheelchair race.

The ceremony opened with a parade and the carrying of the flaming torch that was brought in by senior athletes Silvia Nix of Isabella High School, Ronnie Garrett of Jemison High School, Patrick Cooper of Maplesville and DeMario Cleckley of Chilton County High School.

The Isabella High School Band played as the students walked down the track in the parade representing their schools.

Shortly after, all of the athletes took a Special Olympics oath.

“This is the best day for them,” said Michelle Coppedge, Board of Education program supervisor and organizer of the event. “When they leave here they think this was the best day of their life. Some of the students do not get to participate in these kinds of activities, and this is their chance.”

“Everybody here is a winner,” Driver told the students.

Olympians were scheduled to participate in at least two events but were provided seven activities to enjoy. The events of the day included soccer kick, pick up ducks, ping-pong toss, treasure hunt, softball knockdown, sack race, and girls and boys track.

Other fun activities for the students to enjoy while not competing included face painting, other games and inflatables.

More than 100 helpers volunteered for the event.

“I think this is fantastic,” said Linda Boswell, grandmother of Clanton Intermediate School student Tanner Boswell. “It gives Tanner more interaction with people because he had a problem with interaction and social skills; he would usually tighten up, but he is really enjoying himself out here today.”

This was also the first year the Olympics had a closing ceremony, where Olympians received a medal for participating, each senior was recognized with a trophy for their participation, and all Olympians performed a dance.