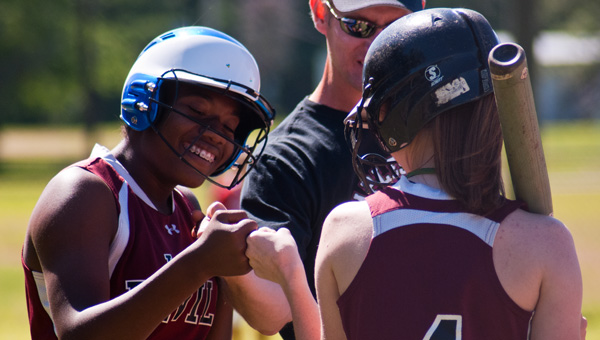 Wednesday’s win was worth the wait for the Maplesville softball team.

Miranda Chandler laid down the bunt that allowed the winning run to score as Maplesville defeated Verbena, 7-6, to win the area championship and conclude a game that was suspended from Tuesday.

Both teams will advance to the regional tournament on May 13-14 at Troy University.

Maplesville led, 6-4, with one out in the fifth inning on Tuesday when persistent rains forced the suspension of the game.

When play resumed on Wednesday, Verbena looked like the better team.

The visiting Red Devils tied the game in the fifth as Victoria Fletcher, who was on base when play was suspended, scored on a throwing error, and Chelsea Ray’s single scored Destinee Tyus with two outs.

VHS then appeared poised to take the lead, loading the bases with one out in the next inning, but Maplesville pitcher Autumn Smith was able to escape the jam by inducing two consecutive fielder’s choices.

In the bottom of the seventh inning, Kiana Andrews singled with one out on a line drive back up the middle that glanced off pitcher Ashlie Shiers, momentarily halting play.

Natalie Arnold followed with another single, and then Chandler entered the game as a pinch hitter.

Chandler laid down a bunt, and the throw was hurried to first base and dropped, allowing enough time for Andrews to round third base and score without a play at the plate.

“We talked about what the situation was and what we needed to do to win,” MHS Coach Ashlie Harrison said about the game’s suspension. “If you’re a team that it takes a while to get going, then you don’t have a chance to do that. We’re usually better the second time through the lineup.”

And she’s off: Maplesville’s Autumn Smith takes off from first base during a game Tuesday. Maplesville and Verbena will finish... read more