Maplesville advances to third playoff round 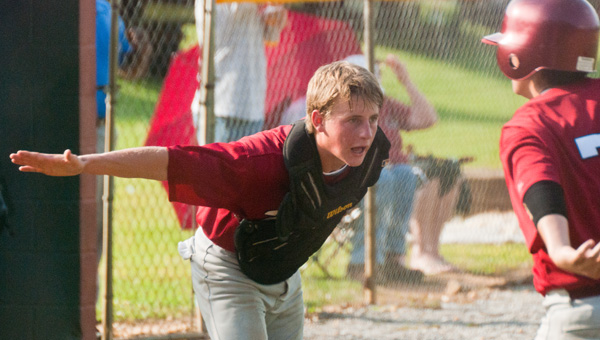 Low five: Maplesville catcher Jared White, left, greets teammate Colby Chambers as he walks back toward the MHS dugout after scoring a run during the first game Monday of a best-of-three series against Verbena.

Maplesville advanced to the third round of the Class 1A state baseball playoffs with two wins Monday over Verbena—15-5 and 13-1.

Each of Maplesville’s wins were shortened, as the hosts were dominant on the mound and at the plate.

James Madsen and Zach Bush had RBI hits in the fourth, and Madsen added a two-run homer in the fifth.

Maplesville ended the game early when both Bobby Smith and Tyler Crumpton struck for two-run doubles in the bottom of the sixth.

Crumpton was the winning pitcher, allowing three earned runs on eight hits and one walk in a complete game performance while striking out six batters.

Smitherman went 2-for-3 at the plate with a home run and three runs scored.

Jared White and Crumpton both went 2-for-3 also, and each scored two runs.

Both Bush and Alex Smith doubled in the game.

Maplesville will play the winner of the Geneva County-St. Luke’s series, which will be decided with a third game Tuesday.

If Geneva County wins, they would be hosted by Maplesville. MHS would have to travel to St. Luke’s.

The road to the second round of the state baseball playoffs has been bumpy for Chilton County. There have been... read more