Three-year-old Jensyn Porter was on vacation with her family in 2008 when she began showing signs of acute lymphocytic leukemia.

Sharp pains bolted through her legs the first night of the trip, hurting so bad she wouldn’t allow her feet to touch the ground, and the second night brought a fever. 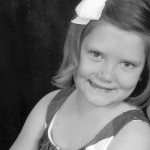 “She just wanted me to hold her,” said Maria Porter, Jensyn’s mother and a teacher at Clanton Elementary School. “She would get in the pool with me, but I had to hold her. It helped because the cold water eased the pain in her legs.”

After visiting a clinic, her parents, Maria and Jay Porter, were told Jensyn had a virus and pulled a muscle in her leg. It explained her fever and why she began walking with a limp, but her were still skeptical.

Over the next couple of weeks, a series of fevers then pains in different parts of Jensyn’s body occurred sporadically. The next occurrence of pain was in her chest.

Jensyn would experience a week of pain, and then the next week she would be fine, her mother said.

“My first thought was she had indigestion, but my mother’s intuition kept telling me that something more was wrong and this wasn’t adding up,” said Porter. “I knew in my heart there was something major wrong with my child.”

Jensyn began showing outward signs during the first week in June and was diagnosed about a month later.

Jensyn had appointments scheduled to visit an orthopedic doctor, pediatrician and an arthritis doctor.

Her arthritis appointment was not scheduled until December, but Porter knew this could not be prolonged for that great amount of time.

“I was so persistent that I got the appointment moved up,” Porter said.

Before Jensyn’s diagnosis, she underwent numerous blood work, but doctors were unable to find anything wrong – at first. She was first diagnosed with having rheumatoid arthritis.

“She had all the signs of juvenile arthritis but no rash,” said Porter. “It was weird because before any of this happened a friend of mine was diagnosed with [leukemia]. She experienced the leg pains and fever, and out of all things, even when the doctors doubted it, this stuck out in my mind, so I asked for extensive testing. I wanted it done.”

Porter, who was 31 weeks pregnant with her youngest child at the time, called the doctor’s office constantly for three days, repeatedly asking if they had anything available. By the second call on the third day, Porter’s persistence paid off. A cancellation had just been made for two days later.

Jensyn visited four different doctors before her illness was diagnosed.

After numerous tests, doctors became convinced she was healthy. One doctor went ahead and performed the blood test one more time. Within an hour after leaving, the doctor called Porter on her cell phone and said he was 99 percent sure Jensyn had leukemia.

A bone marrow test was performed to confirm the new diagnosis.

On July 23, 2008, Jensyn was diagnosed with Pre B ALL, one of several different types of leukemia common in children. ALL is a cancer of the white blood cells, the cells in the body that normally fight off infections.

It has to build up so much in the bone marrow before it spills into the blood stream to be detected, said Porter.

With children’s cancer there are no stages, but normally, when detected, the cancer is already 100 percent, but Jensyn‘s was only 50 percent at the time it was detected. A chromosomes test was also performed and came back normal, which means it is not genetic and there is a low risk for it to return, Porter said.

“Through prayer, the church, the community and our faith, we have been blessed,” said Porter. “I think because of my persistence we found out so fast. My father had cancer, so I was familiar with that type of thing, but it was hard to explain to a 3-year-old that she was sick.”

Jensyn never got upset or questioned her situation but just accepted it and knew the doctors were there to help her feel better, Porter said.

“I don’t know where you get that strength, but it was a humbling experience,” said Porter. “The first year was the toughest. She was so young and didn’t understand.”

Jensyn began treatment within two days after being diagnosed and has done well ever since except for a setback in December, her mother said. One of the side effects of the treatment she received was severe pancreatitis. Jensyn was admitted into intensive care but returned home on Christmas Eve.

“I prepared her and told her that some of the medicines can cause her to lose her hair,” her mother said. “But she has done so well. She’s an exception.”

For a year, Jensyn’s activities and the places she could go were limited. Her heightened chances to easily become ill because of the inability of her white blood cells to combat illnesses hindered her from visiting different places.

“We didn’t go to Wal-Mart for a year, and she didn’t play in the play pins at McDonalds or Burger King because of the germs,” said Porter. “We became germaphobes.”

Last year was her first time being allowed to go to Burger King and play in almost two years.

Jensyn has also the taken a trip to Disney World with the Kids Wish Network in March 2010 and was chosen as a 2011 honored hero for the Pennies for Patients fundraiser through the Leukemia and Lymphoma Society.

“Since she’s been diagnosed, she has walked as a survivor and worn the survivor shirt for the past two years,” Porter said. “She’s been fortunate and blessed. I would like to thank the churches, friends and family. We have received so much support from the community. We were blessed in all kinds of ways.”

At the beginning of April, Jerry Grooms complained of pains on his left side. One Monday while enjoying time on... read more