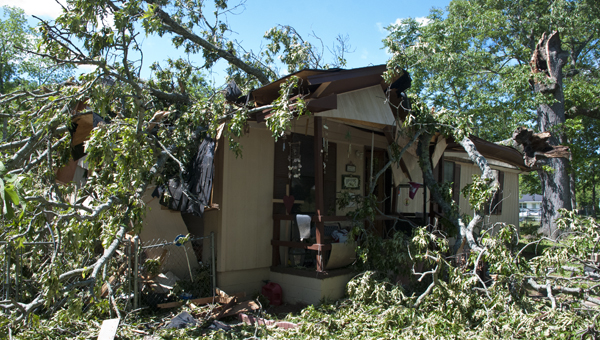 Part of a tree fell on an Fourth Avenue home around 9:30 p.m. Wednesday evening.

Wednesday evening’s storms—among the deadliest in the history of the state—caused no injuries in Chilton County but did damage some property, county Emergency Management Agency Director Bill Collum said.

The storm system killed more than 150 in Alabama.

Gov. Robert Bentley and President Barack Obama both declared states of emergency, and about 1,400 members of the Alabama National Guard were mobilized to provide assistance.

In Chilton County, a tree was blown over onto a house on Fourth Avenue North in Clanton, and two mobile homes and a carport were damaged in Verbena. 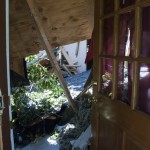 Tree damage to a home on Fourth Avenue in Clanton.

“It looks like it was a small tornado that came through and maybe just skimmed over the surface, but the National Weather Service would have to confirm or deny that,” Collum said.

Of the three homes that were damaged, two appear to still be livable, Collum said.

Five people were home at the residence in Clanton and moved to a storm shelter in the front yard about 10 minutes before the tree fell onto the roof.

“We would have been dead if hadn’t been in that storm shelter,” said Cathy Causey, who was at the residence during the storms.

Of the 9,300 homes and businesses in Chilton County served by the Central Alabama Electric Cooperative, 655 lost power at the peak of the storms Wednesday night, according to Tiffany Trueblood, CAEC communications specialist.

3,900 co-op members lost power, with most outages coming in Coosa and Elmore counties.

Trueblood said all service in the region had been restored by 1 a.m. Thursday.

“We were very, very fortunate that, while we did have some outages, it wasn’t on the scale it could have been,” Trueblood said.

Slightly more than 1,000 Chilton County Alabama Power customers were without power at the storm’s peak. 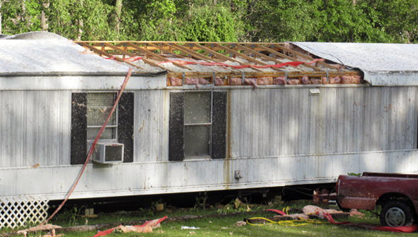 Part of the roof was blown off this mobile home off County Road 511 in Verbena.

The shelters are free to the public, but no food is provided and pets aren’t allowed.