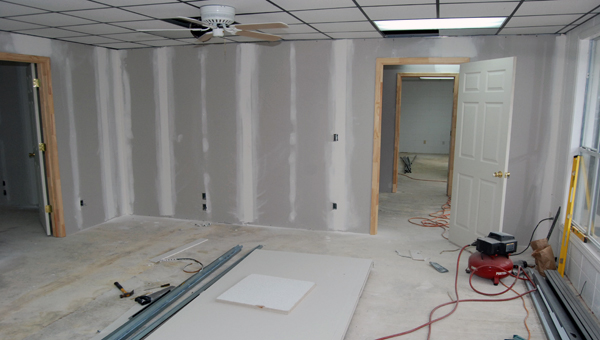 Eight investigators, the narcotics unit and the sexual offenders unit of the Chilton County Sheriff's Department will move into new office space off Highway 145.

Chilton County Sheriff’s Department investigators will soon relocate to a new home, but the move will benefit other county residents, too.

The department is renting and renovating a building off Highway 145 near the Jefferson State Community College Clanton campus.

When completed, the facility will house the department’s eight investigators, plus the narcotics and sex offenders units.

Currently, most department employees work out of the Chilton County Jail, which was built in 1999 when the department had two investigators.

“We just don’t have any room,” Davis said.

The sheriff said a classroom and a meeting room at the jail had already been turned into office space to accommodate the growing number of employees.

In addition to more space, Davis said the new facility will benefit victims of crimes, who currently visit the county jail to speak with investigators.

“If the person that caused the worst experience of their life is at the jail, they really don’t want to go there and discuss what happened,” Davis said. “I’ve had several people tell me, ‘The jail is where the offender goes, not the victim.’”

Sheriff’s department employees and jail inmates have helped turn the building, which included just one large room, into usable space—saving money in the process.

Davis said an estimate to put up walls was more than $4,000, but the department cut its expense to about $1,000 because a county employee was able to complete the work.

“It’s just a way to save money,” Davis said.

The building will feature restrooms, storage space, a conference room and offices for the narcotics unit, the sex offenders unit and Captain Eric Smitherman, who supervises the investigators.

The building is being rented from its former occupant, Talmadge Rutherford Realty.