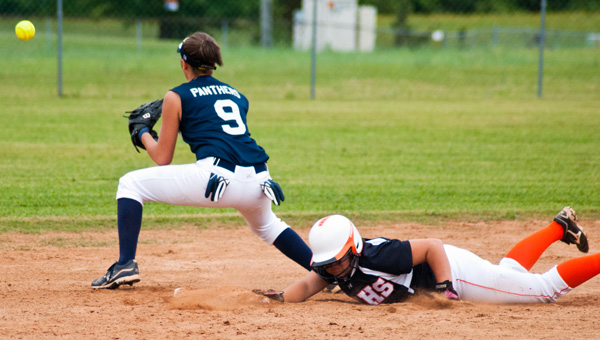 She’s safe: Chilton County’s Lindsey Parrish slides into second base during a game Thursday before Jemison shortstop Shelby Lopez can apply a tag.

Chilton County’s softball team on Thursday won its last home game of the season, 10-0 over rival Jemison in five innings.

The game also marked the last home contest for CCHS seniors Rachel Johnston and Amanda Whorf, who were recognized after the game.

The game was scoreless with one out in the bottom of the second inning, but April Lewis smacked a double to the outfield wall.

Holly Watts drove Lewis home with a hit, and then Lindsey Parrish followed with a double.

Whorf’s single scored Watts, but Jemison pitcher Tiffan Guin struck out the next batter and needed just one more out to end the threat.

But Kadie Coker put the hosts up 4-0 with a two-run single.

Coker scored on a wild pitch, and Brianna Cleckler also recorded an RBI single in the inning.

Cleckler started on the mound for the Tigers, not allowing a runner past second base until the fifth inning—and even then Cleckler was able to escape trouble without yielding a run.

CCHS added two runs in the third inning, one run in the fourth and a run in the fifth that ended the game early via mercy rule.

Parrish doubled with one out, advanced to third base on a sacrifice by Whorf and scored on a hard hit grounder by Johnston.