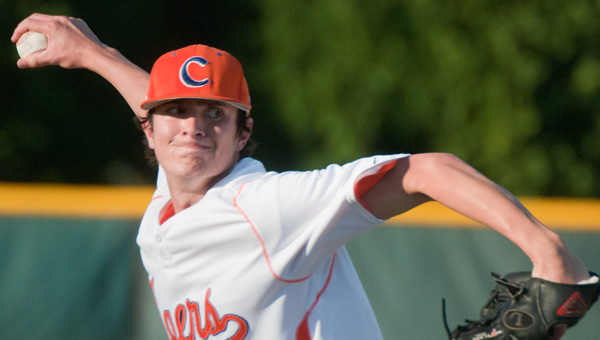 Playoff bound: Chance Calloway and Chilton County visit Greenville for the first round of the state playoffs.

2011 has turned out to be a banner year in Chilton County baseball.

For the first time in at least 10 years—and probably much longer—all six county teams qualified for the state playoffs, which begin Friday.

A pair of teams ended extended playoff droughts: Jemison hasn’t competed in the postseason since 2006, and Verbena hasn’t made the playoffs since 2001.

Jemison and another county team, Isabella, needed a win in their final area game to secure a playoff berth.

Class 4A Jemison plays a doubleheader at Dadeville on Friday in the first round of the playoffs, and if the teams split they will play a decisive third game on Saturday (see pairings below for game times).

The Class 2A Mustangs lost to area foe Billingsley on April 12 and so needed two wins to finish second in the area behind Thorsby and advance to the playoffs.

An 11-1 win in the first game of a twinbill on April 16 was The Austin Haigler Show.

Haigler pitched a complete game (six innings), allowing one run while striking out 13 batters. He also went 3-for-3 at the plate with a double, four runs batted in and a run scored.

Billingsley’s Wes Lawrence hit a two-run home run to give the Bears the lead, but Sawyer Cahalane came through with a two-run homer of his own—with two strikes and two outs and Isabella still trailing by one run—to send the Mustangs to the playoffs in dramatic fashion.

Shearer said his young squad has been inconsistent this season but will need to end that trend in order to have a chance in a best-of-three series at Horseshoe Bend.

“Now we’ve got 30 games, so it’s about time we start showing some consistency. Those two games [on April 16] could really be that turn for us.”

In Class 1A, Maplesville hosts Edward Bell, and Verbena travels to Loachapoka in two winnable series for the local teams.

If Maplesville and Verbena both advance, they would play each other in the second round, meaning one of the teams would be guaranteed a spot in the third round of the playoffs.

The county’s best bet for a deep playoff run might be Class 2A Thorsby, which returns most of the players that lost a close series at Lexington in the quarterfinal round of the playoffs last season.

“This team is very similar to a year ago,” Coach Ab Argent said. “At times, this team may have a chance to be better—they show that potential during games.”

Maplesville’s softball team (19-13) earned the right to host its area tournament with a 16-2 victory over area foe Verbena... read more